Wall panels are sections of wood framed exterior and interior walls manufactured in a factory based on the design information provided in the construction documents for the building.

Elements that Make a Wall Panel 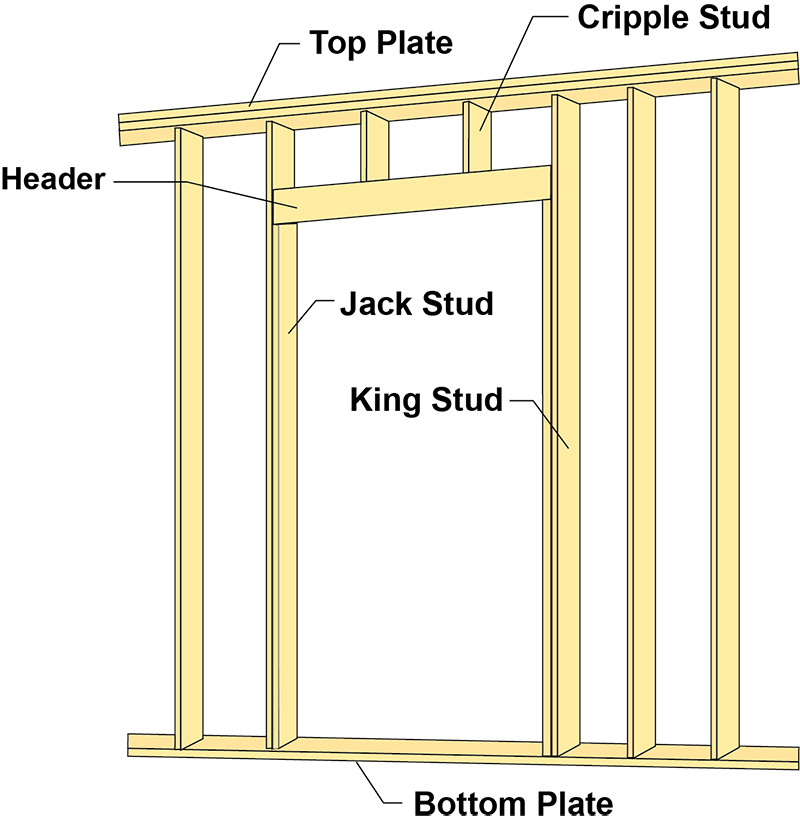 The bottom plate will match the stud size in width and can be spliced at one or more studs to form a longer wall than would be possible with stock inventory. In wall panel applications, multiple panels can be set in succession to create a longer wall that is joined at the double plate (also known as the very top plate) to create as long a wall as desired. It is common to see automated layout markings for studs, king studs, jack studs, and cripples applied when the bottom plate is cut to length by an automated computer driven saw derived from the wall panel CAD software. This adds efficiency and accuracy to the wall panel manufacturing process.

A header is a structural member placed between studs, joists, rafters, or truss openings. It is intended to distribute loads around wall openings such as windows or doors. The header is supported by adjacent members and should be sized for carried loads using some type of software program or taken from code approved span tables. A variety of materials can be used for header stock including dimensional lumber (2x8 to 2x12), engineered woods products (such asglue-laminated beams and LVL material), and even modified 4x2 and 6x2 trusses. The header can be placed just above the rough opening with cripple members above, or it can be placed just below the top plate with cripple framing below to form the rough opening. Multiple members can be plied together using fasteners to add strength to the beam up to the width of the wall while minimizing the depth of the header. Component manufacturers are in a unique position to apply value engineering techniques to optimize header material and lower construction material costs.

A vertical structural element that does not span the full height of the wall and supports vertical load. Commonly referred to as "shoulder studs" as they are the shorter studs on either side of an opening that support each end of the header.

A jack stud is a vertical structural element that sits below and supports a header to transfer its loads downward to the bottom plate and ultimately to the structure’s foundation. Its length determines the header height and is critical for rough openings of windows and doors. Typically, a king stud is placed adjacent to a jack stud and the two are nailed together to ensure both stay in place. Additionally, the jack stud is typically nailed from below, through the bottom plate, and will be toe-nailed into the header above.

Occasionally in window framing the jack stud will be cut into two pieces to allow the window sill plate to run through the jack stud and terminate on each side at the king studs. It is thought that this adds stability to the window frame while minimizing the need for additional support for the ends of the window sill plate. The width of the jack stud will match the size of the adjacent studs used for that particular wall and will normally be a stress-rated dimensional lumber. Jack studs, like many framing members, are known by a variety of names on a regional basis including “shoulder studs” or “trimmers.”

Full-height studs on each side of an opening that are installed directly next to the jack studs for the purpose of resisting the lateral loads.

A king stud is a vertical structural element that is placed off layout adjacent to a framed opening on each side, such as a door or window. It is the same length as the common studs in the wall and fastened in a similar manner. A jack stud is typically placed adjacent to the king stud toward the interior of the opening and the two are nailed together along the length of the two studs. The king stud also acts as the terminating point of the header

A framing best practice is to use the straightest studs for king studs to minimize any bowing in the wall as the king stud provides critical support as well as nailing for drywall and casing around the window or door opening. The width of the king stud will match the size of the adjacent studs used for that particular wall and will normally be a stress-rated dimensional lumber.

The top plate is the upper horizontal framing member of a stud wall. It is typically the same width as the studs and bottom plate and is some type of stress-graded dimensional lumber, commonly 2x4 or 2x6. Nails are driven perpendicular through the top plate into the studs and cripples to secure them in place on a specific layout, either 16” or 24” on center. Splices can be placed at one or more studs in field applied framing to create a longer wall than otherwise would be possible with stock lengths.

In wall panel applications, multiple panels can be set in succession to create a longer wall that is joined at the double plate (also known as the very top plate) to create as long of a wall as desired. It is common to see automated layout markings for studs, king studs, jack studs, and cripples applied when the top plate is cut to length by an automated computer driven saw derived from the wall panel CAD software. This adds efficiency and accuracy to the wall panel manufacturing process. The top plate serves an important role in providing wood fiber for the perimeter nailing of structural and/or insulated sheathing.

A second top plate, also known as a “double plate” or “very top plate” is applied in the field to lock together intersecting walls. Occasionally, field framed and manufactured wall panels will be built with a large portion of the double plate attached with gaps left at wall intersections to speed up the process when the walls are being installed. Often, construction documents specified by the architect and/or engineer of record will specify double plate parameters such as joint laps and length. A best practice is to consult the construction documents or the local building code for this information prior to installation. It is common practice for framers to ”square” the walls when installing the double plate to ensure the structure is true to dimensions and the walls are plumb. Advanced framers will apply truss spacing layouts on the double plates prior to putting them in place to aid and speed up truss installation. This information can also be applied when the double plate is being cut by computer driven saws in wall panel applications involving information derived from wall panel CAD software.