Originally Published by: NAHB — March 8, 2022
SBCA appreciates your input; please email us if you have any comments or corrections to this article.

Per the latest results of NAHB’s Home Building Geography Index (HBGI), single-family home building showed higher growth rates across all regional submarkets in the fourth quarter of 2021, relative to the fourth quarter of 2020. Quarterly growth, however, trended downwards for all regions in the third and fourth quarters of 2021. Supply-side constraints and expectations of rising interest rates, particularly in the last few weeks of the year, were key contributors to the decline.

Single-family home building in the fourth quarter was a continuation of what began in the third quarter of 2021. In the third quarter of 2021, as more workers transitioned back to the workplace, single-family home building received a small boost in higher density urban core and exurban areas. Prospective buyers sought more space and took advantage of still low interest rates, relative to pre-pandemic levels. It was an anemic gain amid higher material costs weakening permit issuances in other Regions. This trend continued into the rest of the year. 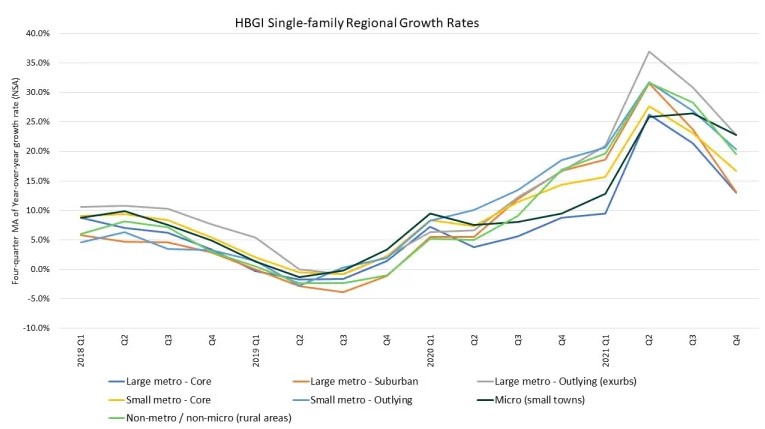 The HBGI data are non-seasonally adjusted. More information about the HBGI can be found here.