Originally Published by: Eye on Housing — December 7, 2021
SBCA appreciates your input; please email us if you have any comments or corrections to this article.

The suburban shift for single-family home building, which was precipitated in large part by the onset of the COVID-19 pandemic last year continues. But new data reveals that higher density markets are making a comeback as well, according to the third quarter edition of the NAHB Home Building Geography Index (HBGI).

As more workers transition back to the workplace, there were gains for housing production in both urban core and exurban areas. Comparing the four-quarter moving average of the year-over-year growth rates of the third quarter of 2020 to that of 2019 shows a resurgence of single-family home building in all regional geographies tracked by the HBGI.

But the gap that proportionately favored lower density locations in 2020 closed somewhat in 2021 thanks to a rebound for building in higher density communities. For example, the four-quarter moving average for large metro core areas single-family permit growth between the third quarter of 2019 and 2020 was 5.6%, while exurbs grew at twice that rate (12.3%).

But jumping ahead a year, the new permit rate of growth in this same four-quarter period between 2020 and 2021 increased to 21.1% for large metro core markets and 30.8% for the exurbs, reducing the proportional gap between the growth rates.

Nonetheless, exurbs of large metros recorded the highest growth rate of all geographies, as noted in the chart below. 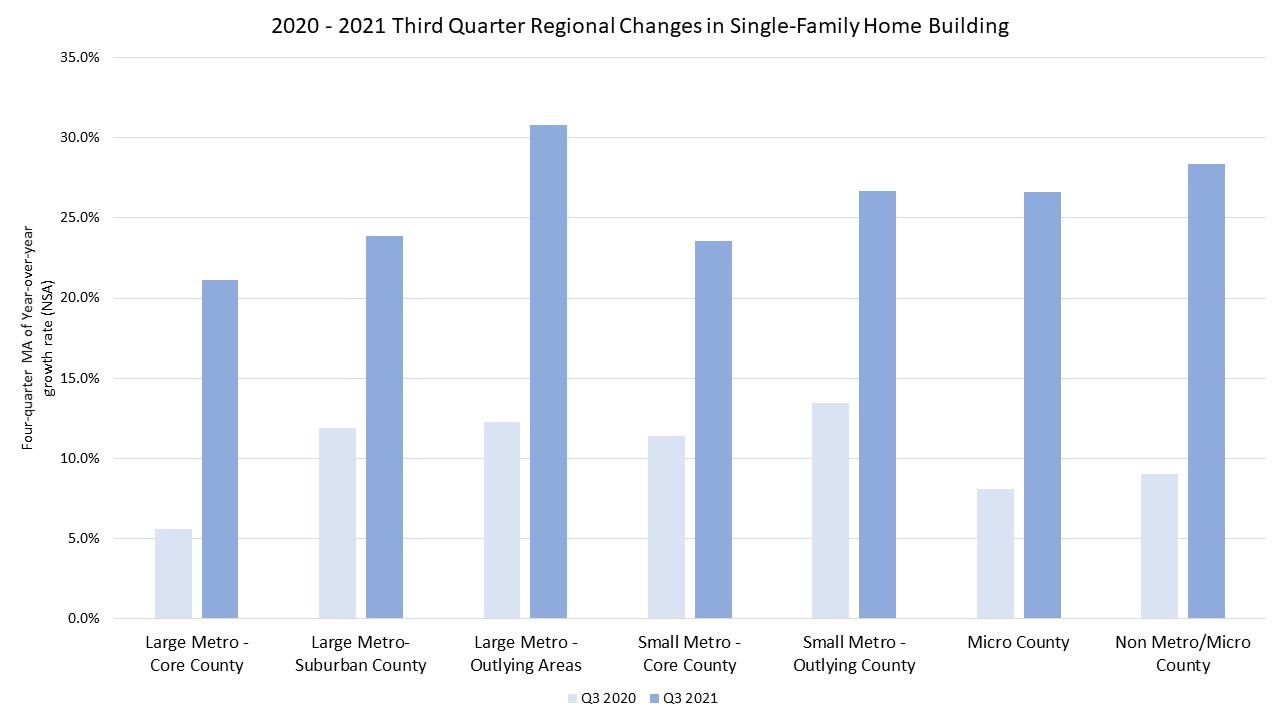 The suburban shift of 2020 has altered market shares. Despite strong growth for all geographies, core counties of large metro areas and large metro suburbs lost market share to less dense submarkets, ending at 16.7% and 25.7%, respectively of all single-family home building.

In contrast to single-family home building, the market shares for multifamily construction show a more significant increase in smaller cities and rural areas while the pace of new permits eased in larger metropolitan markets. A future post will explore this in more detail. An additional post will examine the third quarter performance of traditional second home markets.