Originally Published by: LBM Executive by Greg Brooks — June 15, 2021
SBCA appreciates your input; please email us if you have any comments or corrections to this article.

With consolidators doing their best to hoover up both independents and each other in recent days, some have forgotten about the pot Craig Webb stirred with his claim that Builders FirstSource, US LBM, ABC Supply, 84 Lumber, and Beacon Roofing Supply now sell “roughly 50%” of all building materials not sold by Home Depot, Lowe’s, or Menard’s. 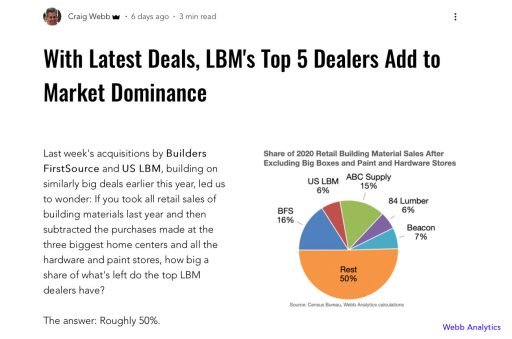 Craig acknowledges that “others may question the math and methods used here,” but insists that “it’s hard to question the notion that, in the pro-oriented branch of building material sales, LBM is evolving toward the kind of market concentration that we’ve been seeing at builders and many other industries.”

Maybe yes, maybe no. If in fact five chain operators do account for half of all LBM sales not made by the big boxes, maybe independents are on the road to irrelevance, maybe even extinction. But before we make that leap, the prudent thing would be to accept Craig’s invitation to question his math and methods.

Here’s how he arrived at his conclusion: The Census Bureau organizes economic output using the North American Industry Classification System. NAICS is a tiered numbering system ranging from two to six digits, like this:

Every five years, the Census Bureau conducts a comprehensive economic census to get a hard count of the total firms, establishments, employees, and revenue in each NAICS code. In the interim years, Census estimates revenue at the four-digit level, i.e., for the industry as a whole.

Craig took the 2020 estimate for NAICS 4441 (building material retailers), then backed out Home Depot, Lowe’s, and Menard’s. He found that the combined sales of BFS, US LBM, ABC Supply, 84 Lumber, and Beacon Roofing Supply work out to about 50% of the remaining dollars.

So what’s wrong with that? Two things: 1) NAICS 4441 does not represent the sum total of LBM sales to contractors and other end users, and 2) the revenue generated by Craig’s Big Five dealers is not classified exclusively in NAICS 4441.

Companies choose their own NAICS codes. If they’re B2B sellers, they frequently define themselves as wholesalers, manufacturers, or even contractors rather than retailers. ABC Supply and Beacon are part of NAICS 423330 (roofing, siding, and insulation wholesalers). The revenue they contribute to NAICS 4441 is zero.

Moreover, companies that engage in multiple business activities allocate revenue to multiple NAICS codes. The NAICS Association classifies 84 Lumber primarily as a home center (444110) but secondarily as a truss manufacturer (321214). US LBM is a paint, varnish, and related supplies wholesaler (424950), but also a lumber, wood panel, and millwork wholesaler (423310).

BFS is listed first as a cut stock, resawing, and planing manufacturer (321912), and second as a home center. Unless you look at the company’s SEC docs, which define it as a clay building material and refractories manufacturer (327120). There is no law that says self-assigned NAICS codes need to be accurate.

Nor does it matter. When the Census Bureau collects data for the economic census, it assigns NAICS codes to each establishment within a company based on business activity at the establishment, not the company as a whole.

At SICCODE.com, which resells Census Bureau data for mailing lists, BFS branch locations are classified in at least 23 different NAICS codes. In fact, more than 30 NAICS codes other than 4441 derive at least part of their revenue from building materials sold to contractors and other end users. 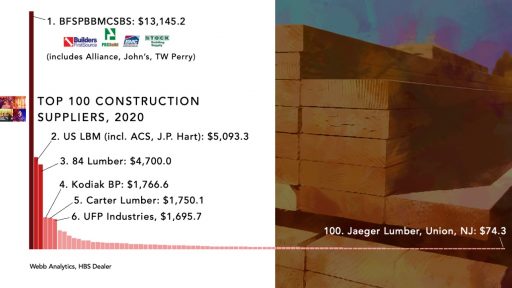 This is not to say that the Big Five don’t hold a lot of market share. Craig’s numbers don’t support his claim of 50%, but the percentage may well be greater today than it has ever been. It could even be 50%. That’s the point: We don’t know.

But even if it is that high, that’s not bad news for independents.

The real story is that investors are falling all over themselves to get a piece of the U.S. housing market because everything they see and hear says pent-up demand is at historic levels. The numbers no one can argue with—i.e., the demographics—say we’re on the verge of the longest, strongest housing boom we’ve ever seen.

Market share always looks like market dominance to a spectator. Some local chain operators dominate their markets, but the consolidators who own them are buying share, not capturing it. You can buy a Super Bowl ring on Ebay, too. That doesn’t make you a champion.

For execs at equity-backed companies, the easiest way to keep the money flowing is to keep making acquisitions. Healthy independents can take advantage of that, and some already are.

A couple of weeks ago, BFS won the battle to acquire Alliance Lumber in Phoenix. According to the press release, BFS paid “approximately $400 million” for Alliance, which has annual revenue of “approximately $330 million.”

The typical LBM dealer earns a 4% to 5% EBITDA margin. If the company is sold, the selling price is typically five to six times EBITDA. Even if Alliance’s EBITDA is double that of a typical dealer, $400 million works out to a 12x multiple.

Just like football, when one star player gets a cap-breaking contract, everyone else’s salary goes up. We’re in the seller’s market of a lifetime and anyone tempted to take advantage of it should. Quickly, though. Like home sales, the feeding frenzy will lose steam when buyers realize they’re buying at the top of the market.

If you wait too long, you’ll just have to settle for the housing boom of a lifetime.