Originally Published by: NAHB — November 1, 2022
SBCA appreciates your input; please email us if you have any comments or corrections to this article.

The count of open, unfilled jobs for the overall economy increased in September, rising from 10.3 million open positions to 10.71 million. This represents a small increase from a year ago (10.67 million). This increase occurs despite signs of a slowing economy amidst aggressive monetary policy tightening by the Fed.

The hotter than expected labor market data pushed the 10-year Treasury rate back above 4%. Ideally, the count of open, unfilled positions slows to the 8 million range in the coming months as the Fed’s actions cool inflationary pressures for the U.S. economy. However, while higher interest rates are having an impact on the demand-side of the real economy, the ultimate solution for the labor shortage will not be found by slowing demand, but by recruiting, training and retaining skilled workers.

The construction labor market saw an increase for job openings in September despite economic activity slowing, particularly for the housing market. The count of open construction jobs increased from 386,000 to 422,000 in September. This is actually higher than the estimate from a year ago (348,000). The labor shortage persists.

The construction job openings rate moved higher, increasing to 5.2% in September after 4.8% in August. The data series high rate of 5.5% was recorded in April. 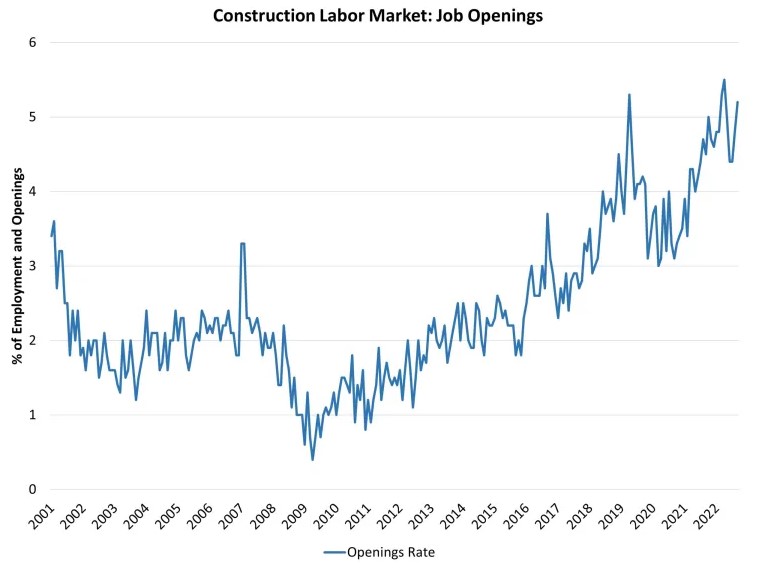 The housing market remains underbuilt and requires additional labor, lots and lumber and building materials to add inventory. However, the market is slowing due to higher interest rates. Nonetheless, hiring in the construction sector remained solid at a 4.7% rate in September. The post-virus peak rate of hiring occurred in May 2020 (10.4%) as a post-covid rebound took hold in home building and remodeling.

Consistent with slowing of building activity, construction sector layoffs increased to a 2.1% rate in September. In April 2020, the layoff rate was 10.8%. Since that time however, the sector layoff rate has been below 3%, with the exception of February 2021 due to weather effects. The number of layoffs in construction increased to 166,000, compared to 100,000 a year ago.

Looking forward, attracting skilled labor will remain a key objective for construction firms in the coming years. However, while a slowing housing market will take some pressure off tight labor markets, the long-term labor challenge will persist beyond an ongoing macro slowdown.