This is What is Currently Keeping Contractors Up a Night

Originally Published by: Construction Dive — January 9, 2023
SBCA appreciates your input; please email us if you have any comments or corrections to this article.

Builders are bullish on infrastructure work this year thanks to federal funding, but expect supply chain snarls and hiring difficulties to persist, according to Associated General Contractors of America’s 2023 Construction Outlook National Survey.

COVID-19 continues to impact the industry, hitting supply chains in particular. That’s the top concern for builders in the survey, as the uncertainty has caused a variety of negative ripple effects that ultimately mean higher costs and lower profits. As inflation and the specter of a recession continue to loom, contractors are feeling less confident about private sector work.

Builders have reason to be worried: last year 36% of respondents had projects canceled or postponed but not rescheduled. The main reason given, for about half the projects, was rising costs. The association received 1,032 responses overall, primarily from general contractors.

Although contractors are optimistic overall, that doesn’t mean there aren’t rocky times ahead, said AGC Chief Economist Ken Simonson in a webinar last week about the survey.

“Even when we’ve had recessions or slow growth expectations for the economy, contractors are by nature optimists,” Simonson said. “But it is notable that in nearly all of these categories, particularly on the private side, contractors have lower net positive readings or deeper negative readings than they did in previous years.” 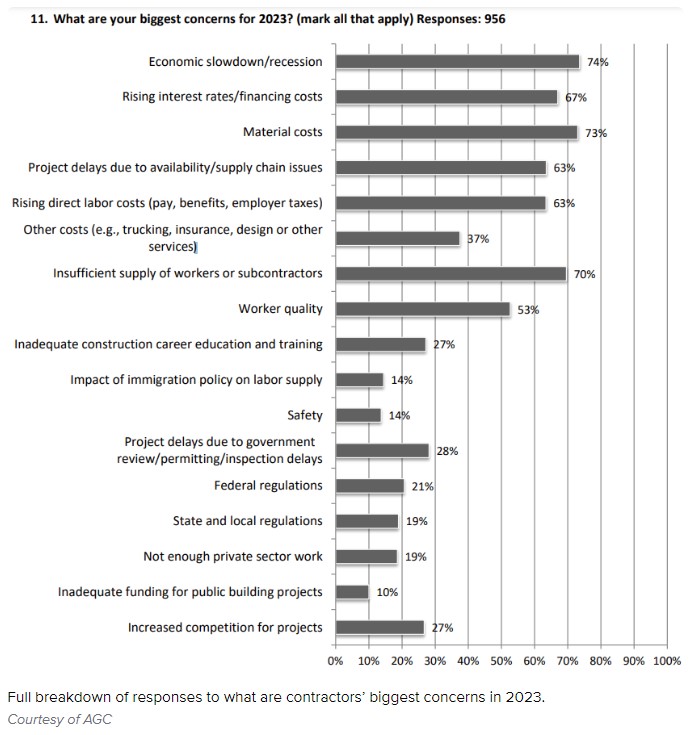 Here are some other takeaways from the survey:

Contractors’ biggest concern for the coming year is the supply chain. The ongoing issues cause project delays, time-consuming logistical headaches and price hikes for materials.

“Supply chain issues and material cost issues will continue, and will continue to have profound effects on schedules and affordability of new projects,” said Mac Caddell, president of Caddell Construction headquartered in Montgomery, Alabama, during the webinar.

Hiring will only get harder

Workforce shortages make projects take longer and cost more, and look set to worsen in 2023. In the coming year, 69% of contractors expect to hire and only 11% expect to reduce their headcount, according to the survey. To entice workers, last year 72% increased base pay rates more than in 2021 and about a third boosted bonuses and benefits.

Despite those efforts, 80% are currently having difficulty finding workers and a majority of respondents expect those difficulties to persist. Plus, 83% of contractors worry the shortage and resulting inexperienced skilled labor pool will pose a challenge to the safety and health of their firm’s workers — the biggest threat respondents identified by far.

“I think a lot of the easy levers have been pulled from a wage and a benefits standpoint, and now we’re really needing to look at all the things that no one’s talking about, with demographics and culture and what our jobs look like,” Casella said during the webinar.

While the outlook is more dim for private jobs, contractors are optimistic about infrastructure and other public work, the survey shows. That optimism is widespread even though only 5% of respondents are working on new projects funded by the infrastructure act, while 6% have won bids but have not started work. Another 5% have bid on IIJA projects but haven’t won awards yet, while 21% said they plan to bid on projects but nothing suitable has been offered so far. 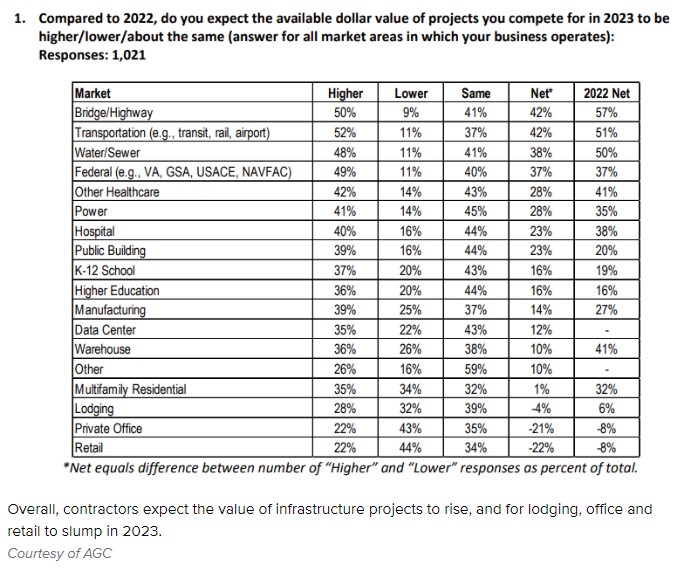 AGC CEO Stephen Sandherr warned the IIJA’s Buy America and labor stipulations are still unclear, and said that will make it harder for state and local jurisdictions to advance these projects.

“Federal officials need to deliver on the promise of these substantial new investments in infrastructure and construction,” Sandherr said. “To do that, they will need to address much of the regulatory and permitting uncertainty that muted the hoped-for benefits of the bipartisan infrastructure law in 2022.”