Originally Published by: HBS Dealer — June 3, 2021
SBCA appreciates your input; please email us if you have any comments or corrections to this article. 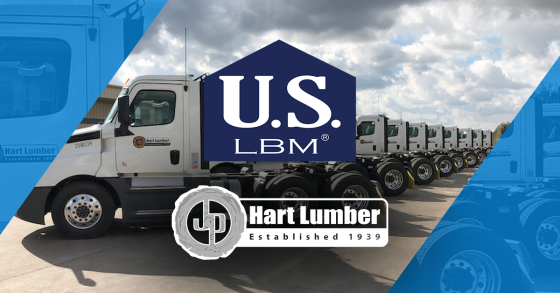 US LBM has quickly struck again; this time in Texas.

Less then two weeks removed from announcing its acquisition of American Construction Source, the building materials distributor reported that it has reached an agreement to acquire J.P. Hart Lumber and Hart Components.

J.P. Hart Lumber operates eight locations across Texas. Upon completion of the acquisition, US LBM will operate 65 locations in Texas.

Founded in 1939 by J.P. (Jimmie) Hart and headquartered in San Antonio, Hart's operations serve the major markets in Texas with five building materials yards and one window distribution facility across Austin, Houston, Dallas-Ft. Worth and San Antonio.

"Joining with US LBM in our 82nd anniversary year will allow us to continue to grow, provide new solutions for our valued customers and opportunities for our dedicated people," W.B. (Speedy) Hart and Greg Wright said in a prepared statement. Both will both remain with Hart, with Wright continuing to lead day-to-day operations following the completion of the acquisition.

"The Hart team is widely respected and known for excellence and innovation by professional builders across Texas," said US LBM President and CEO L.T. Gibson.

In May, US LBM added 38 locations in Texas through the acquisition of Higginbotham Brothers.

"When this acquisition is completed, US LBM will have an expansive network across Texas, with a strong presence in every major housing market, including Austin, Houston, Dallas-Ft. Worth and San Antonio,” Gibson said.

The transaction is expected to close during the third quarter of 2021.

In May, US LBM announced an agreement to acquire American Construction Source with more than 70 locations. That transaction is also expected to close in the third quarter of 2021.

The JIAN Group, LLC acted as financial advisor to Hart, with Norton Rose Fulbright and WyrickRobbins serving as legal counsel to the company.

Based in Buffalo Grove, Ill., US LBM now operates about 400 locations across the nation.