What Can Happen If Your Subs Use Your Safety Program?

Originally Published by: SBCA Magazine — May 9, 2018
SBCA appreciates your input; please email us if you have any comments or corrections to this article.

Since its founding, one of the goals of the National Framers Council (NFC) has been to provide a thorough, consistent, third-party safety program in Spanish and English for professional framers and their subcontractors (subs). 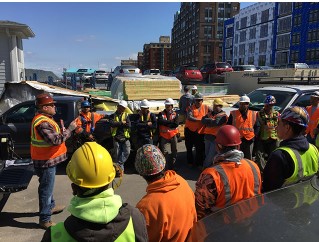 NFC President Ken Shifflett of Ace Carpentry in Manassas, Virginia recalls, “This [subject] goes back to some of the initial meetings before the NFC really got [started].” These initial meetings involved larger framing contractors brainstorming ways to solve their common problem: their subcontracting labor had limited access to a quality safety program. Ken says that while larger framing companies often have a safety program of their own, the subs they work with do not “have the money, time, or know where to go to really get a safety program that is specific to the framing industry.” In addition, it creates liability issues for larger companies to provide their own safety program to subs and require them to follow it. “If we take Ace Carpentry’s safety program and submit it to a [general contractor] and say, ‘This is our safety program,’ the [general contractor] is expecting everybody on that job under Ace Carpentry’s control to follow that safety program,” says Ken. As a result, a citation given to a sub for a safety violation can mean a citation for the jobsite framing contractor as well.

In response to this problem, NFC developed FrameSAFE, a comprehensive program to which subs can subscribe independently. “That was our goal, to get a safety program into our [subs] hands that was affordable, easy to follow [and] in their language,” says Ken. “FrameSAFE…is a third-party safety program [and] it is specific to framers,” which means “the liability of me being controlling contractor…is now not an issue,” Ken adds. “What it allows us to do is to be able to train on the same topics – be able to have the same expectations for safety on the job – so basically everybody is talking the same talk, looking for the same issues, making sure the workers are protected in the same manner all the time.”

Recent data suggest that NFC’s initial vision for FrameSAFE is now being realized. “There [are] almost five times the amount of [subs] that have now signed up for the FrameSAFE program compared to …professional framers across the country,” says Ken. “It’s kind of cool to be able to see that one of the goals that we had five years ago is now starting to come true…and it’s not just happening in one region. It’s happening in many different regions across the country.”

FrameSAFE has taken hold with subs throughout the country for “multiple different reasons,” says Ken, and numerous NFC initiatives have been put in place to make it easier than ever for subs to gain access. Some larger framing companies, seeing the value of FrameSAFE, have either taken it upon themselves to promote FrameSAFE to their subs or have worked with NFC to provide incentives for their subs to join.

“[At] Ace Carpentry, we encourage all of our subcontractors to go and purchase the FrameSAFE program, and some of them have the money to be able to do it,” says Ken. For those who don’t, “We’ll buy it, and over X amount of weeks deduct [the cost from] their check.”

This is similar to the approach taken by COO Frank Mudd of Southernwood LLC in La Plata, Maryland in collaboration with NFC. Frank invited Scott Stevens, NFC vice president, to give a presentation about NFC membership and FrameSAFE to his subs. Those who attended the presentation (which was also translated into Spanish) were offered free NFC membership, and Frank offered to purchase each new member a FrameSAFE subscription, allowing them to pay him back over time with a check deduction plan. At the end of the presentation, 14 of the 18 subs in attendance joined NFC and became FrameSAFE subscribers.

Glen Yates, President of Colt Builders Corp in Salt Lake City, Utah, saw many of his subs sign up for FrameSAFE after he simply made it a requirement for working with Colt. Glen says that “rather than having to review potentially a whole bunch of different…safety plans, we just thought, ‘You know what? We’ll just make it a requirement that [if] you’re going to work for us you [have to] go with the industry standard…FrameSAFE.’” Glen describes that his thought process was, “We’ve got something great staring us in the face here, why don’t we utilize it and help them – and help them help us?” At least 17 subs that work with Colt became FrameSAFE subscribers after Glen instituted the policy. Glen says his company has received feedback from subs who are “thankful that they have a resource to go and get something legitimate.” Glen adds, “Having…a legitimate plan is very, very important for their well-being and…for us.”

Ryan Mellin, co-owner of Innovative Construction Group (ICG) in Jacksonville, Florida says his professional framing company specifically joined NFC “so our subcontractors would have access to [FrameSAFE].” Joining NFC meant that ICG’s subs could also join for a nominal fee, giving them the ability to purchase the program. “For them to now have the resource that we do…it made a lot of sense for us to join,” he says. Ryan pointed out the value of the FrameSAFE Toolbox Talks in particular: “FrameSAFE is great for short Toolbox Talks [because] they’re short and sweet [and] in Spanish and English.”

NFC is glad to see one of its early goals coming to fruition – a goal that promotes the safety of America’s professional framing workforce – and appreciates the efforts that members have taken to turn that goal into a reality. Following the example of the NFC members above, others willing to promote FrameSAFE to their subs can help bring this goal to an even greater level of accomplishment.