Originally Published by: Daily Commercial News — November 8, 2021
SBCA appreciates your input; please email us if you have any comments or corrections to this article.

In response to the growth of construction in mass timber, the College of Carpenters and Allied Trades (CCAT) in Woodbridge, Ont. is offering a four-week course for workers in its assembly and erection this November. 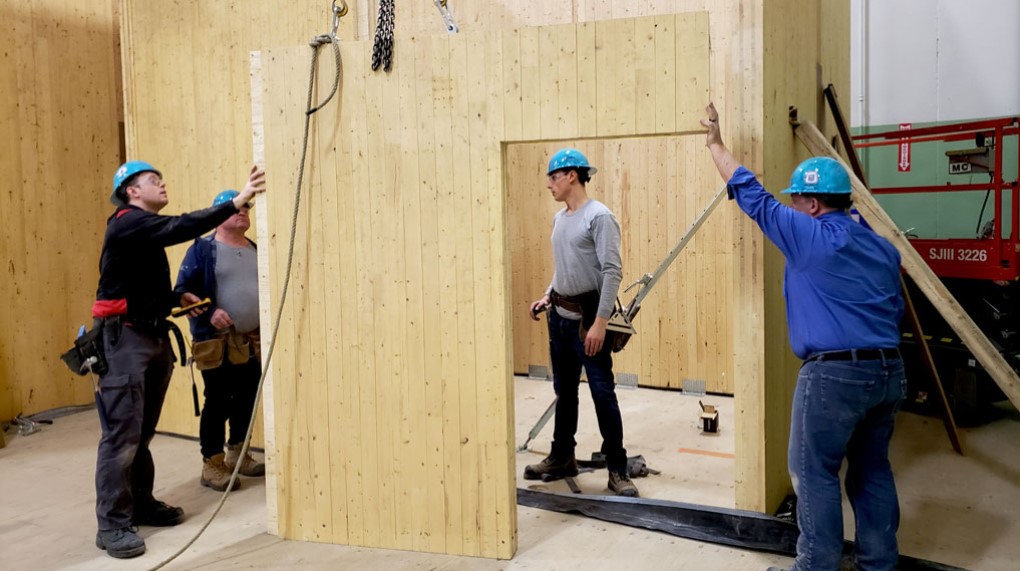 COLLEGE OF CARPENTERS AND ALLIED TRADES — Pictured are mass timber construction students in training at the College of Carpenters and Allied Trades (CCAT) in Woodbridge, Ont. Because of demand the CCAT is offering a four-week course for workers in assembly and erection this November. Students in the course either have extensive experience in construction or are third- or fourth-year apprentices. Among the companies sending workers are PCL Construction and EllisDon.

Using different full-scale modules or mockups as mediums, instructors will teach 12 students how to use specialized fastening systems and timber framing tools to put up prefabricated walls, ceilings and other elements that comprise mass timber structures, says Tony Currie, program director of the CCAT.

Since the course first ran as a pilot in 2019, the training centre has added a fourth teaching module, a complex segment of a structure which distinguishes itself from other modules in part because it is a hybrid, containing steel as well as mass timber, says Currie.

That is important as industry observers see many structures in the future being hybrids comprised of wood, steel and concrete.

Moses Structural Engineers developed the concept and design of the mass timber modules for the course.

Mass timber buildings are erected quickly when everything goes as planned and the crew is properly trained.

“You have to have a good crane operator, rigger signaller and a good sequential schedule for (materials) deliveries,” points out Currie, noting planning is critical to proper and expeditious assembly.

Students in the course either have extensive experience in construction or are third- or fourth-year apprentices.

Among the companies sending workers are PCL Construction and EllisDon.

Currie says while experienced carpenters will use many of their skills to construct mass timber structures, making sure it is plumb, square and level, for example, assembling, handling and erecting the large timber panels, columns and beams — and even selecting fasteners — will be new to them.

Among the takeaways for students will be an understanding of shear forces, tension/compression, ductility of screws (fasteners) and traits of hardwoods and softwoods, he points out.

Patrick Crabbe, national director of mass timber for Bird Construction, calls the course “essential for the responsible growth in education for the mass timber industry in Ontario.”

Crabbe says unlike conventional construction, mass timber is “a system. Everything coming onto the site has to be pre-planned and obviously very organized to accommodate the rapid pace.”

He says there are “a lot of tips and tricks” to mass timber installations, starting with craning panels and beams from one point to another onsite in a safe manner.

Furthermore, there are numerous fasteners and techniques to assembly “while you are managing moisture to prevent any dimensional movement.”

Crabbe praises Mike Yorke, president of the Carpenters’ District Council of Ontario, for promoting the sector and including private companies “to work alongside the union to really help grow the education.”

Cristina Selva, executive director of the CCAT, says the industry has “taken off” since the training centre ran the pilot course in 2019.

She says because of the limited training space at the CCAT, largely resulting from pandemic-related health and safety protocols, it is difficult to schedule more mass timber courses.

The building industry in general is “crazy busy” and the union has been signing up new carpenter apprentices at a growing clip.

The CCAT has its sights on leasing additional space in 2023, possibly nearby under the same roof as the Carpenters’ District Council, she adds.

“For now we’re doing a dance trying to accommodate as much as we can.”

When Selva started working at the training centre 22 years ago, there were four journeypersons for every one apprentice. Today about half of the union’s membership is apprentices because the aging workforce is seeing more retirements, which is leaving fewer experienced workers in the field and a growing need for more training.

“The challenge is because you have a much younger, less experienced labour force, you have to do a heck of a lot more training. Just regular apprenticeship classes are not enough. They have to be supplemented with a lot more specific health and safety training programs to make them productive and help them work safely.”

Mass timber’s popularity is spreading across Canada and the U.S. The carpenters training centre in Woodbridge received an enquiry from a union contractor in California who wanted to send two of its superintendents to the mass timber course because the sector is so busy in that state.

“To me that speaks volumes of its validity,” says Currie. “It is the biggest compliment we can get.”