Originally Published by: Builder Online — January 24, 2022
SBCA appreciates your input; please email us if you have any comments or corrections to this article. 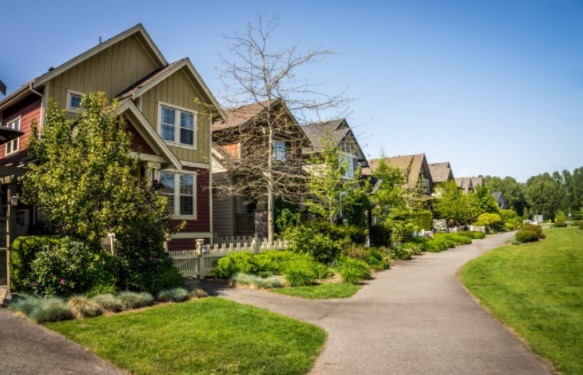 In 2021, 6,740 new built-to-rent homes were completed—the highest yearly total to date, according to Yardi Matrix data. But, several industry sources, including a new RentCafe study, say the trend is just beginning and growing at a rapid pace.

Although single-family rentals are not a new concept, the pandemic created an unprecedented demand among renters for space and privacy. According to the RentCafe survey of 3,300 renters, as many as 78% said they were interested in living in a community of single-family homes.

Currently, there are about 90,000 existing single-family homes in the U.S. in nearly 720 communities designed specifically for renting. They include single-family detached houses, townhomes, duplexes, and even quadruplexes that come with a backyard or a garage—or sometimes both. 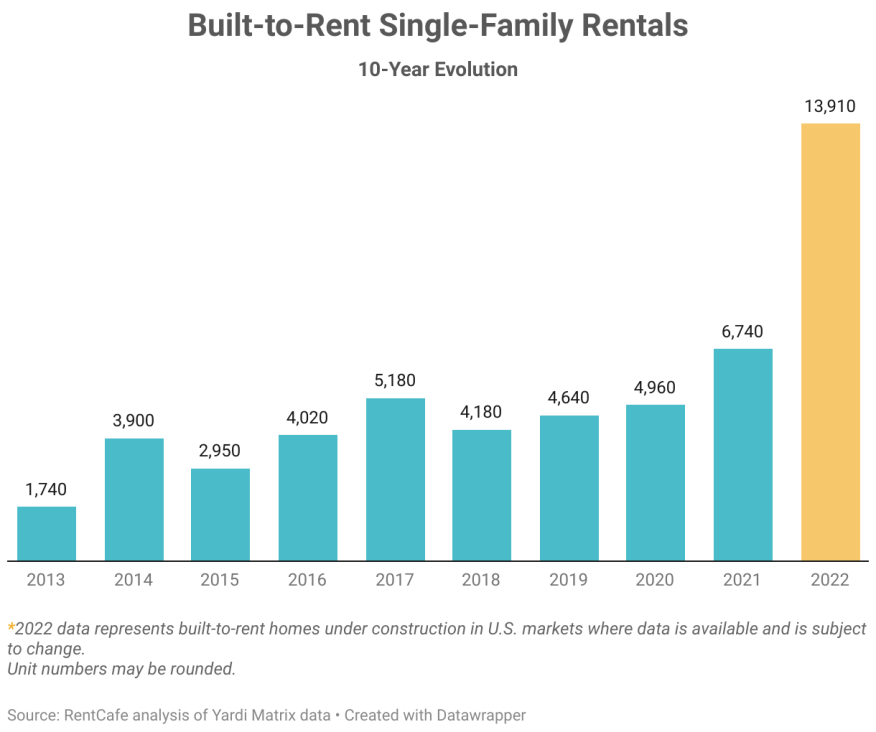 “It’s easy to see the appeal of built-to-rent homes: The trend combines the financial and leasing flexibility of a rental with the amenities and convenience of a professionally managed property, all while living a single-family home lifestyle,” says Alexandra Ciuntu, author of the RentCafe report.

Because developers need large lots to build on, rental home communities are prevalent in low-density areas, with the majority, 61%, located in suburbs and 39% situated in more urban areas, reports the study.

“While they’re more likely to be found in urban settings in the Southwest, they tend to be more present in suburban areas in the Midwest and Northeast,” continues Ciuntu. “Either way, single-family rentals are filling up fast, with the occupancy rate in 2021 2% higher than apartments (97% compared with 95%).” 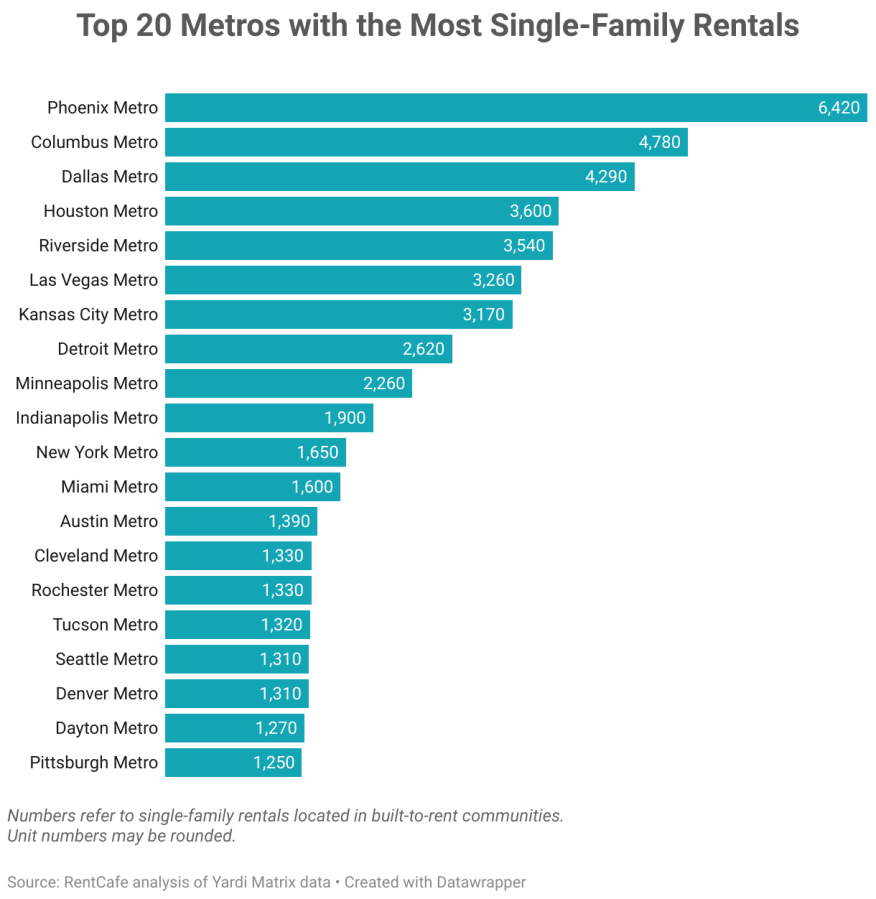 The Phoenix metro is at the forefront of homes-for-rent development with a total of 6,420 houses in built-to-rent communities. Next, Columbus, Ohio, is the second-most popular metro with 4,780 homes, and the Dallas metro has the third-highest number of home rentals at 4,290.

For cities, Las Vegas ranks No. 1 with the most single-family rentals at 2,520, and Houston has the second-highest number of homes in built-to-rent communities at 1,620.

Five Arizona cities also make up the top 20. The most notable are No. 3 Tucson and No. 4 Phoenix—two cities with increasing numbers of built-to-rent projects that tally around 1,300 completed single-family rentals each. 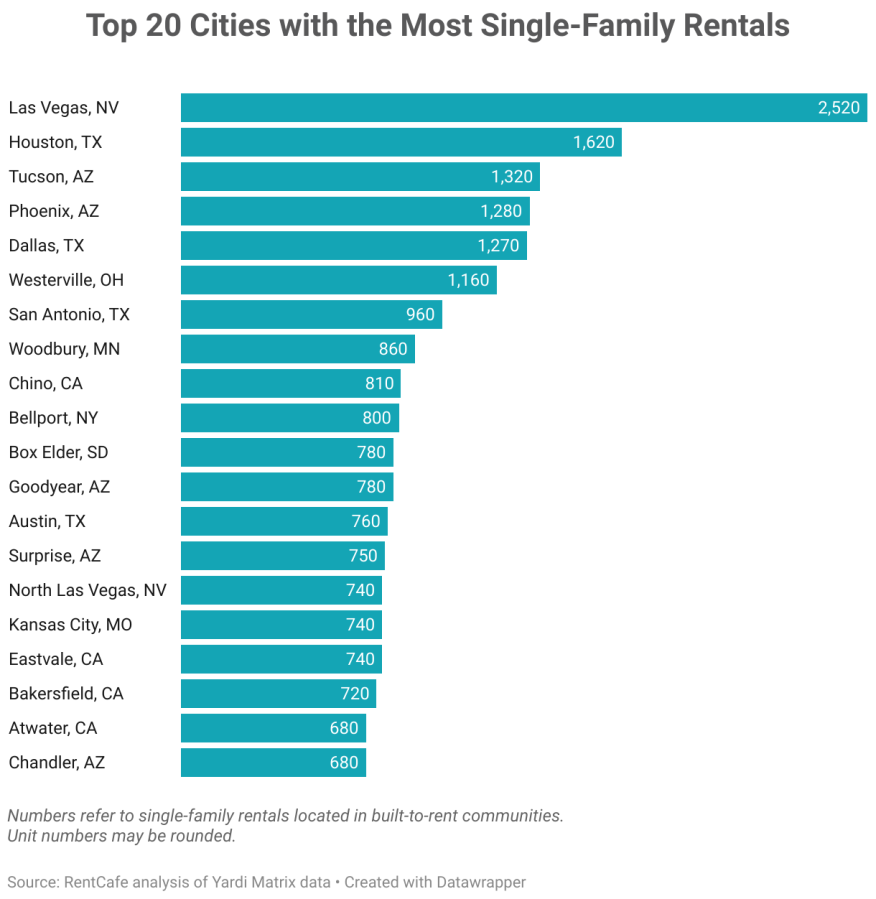 Homecoming at the Preserve in Chino, California, with 805 units; Rosemont Brookhaven in Bellport, New York, with 795 units; and Antelope Ridge in Box Elder, South Dakota, with 780 units round out the top five largest built-to-rent communities in the U.S., according to the study.

“This is just the beginning of a trend we’re bound to see much more of as the pace of construction is set to double,” adds Ciuntu. “Specifically, there are an estimated 14,000 built-to-rent homes under construction and set to open their doors to renters beginning this year.”