Originally Published by: The Journal of Light Construction — February 3, 2022
SBCA appreciates your input; please email us if you have any comments or corrections to this article. 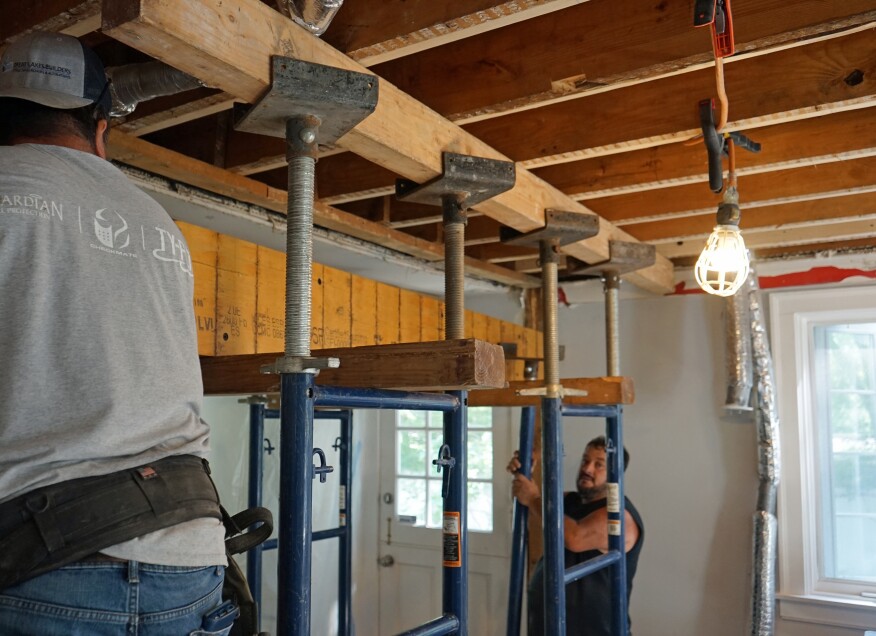 My family’s company, Great Lake Builders, specializes in structural repairs in and around Chicago. Many of the homes we work on are similar to the one shown in this article: wood-frame buildings that have outlived their structural capacity. Some of these suffered damage from badly executed floor-plan changes or from mechanical contractors hacking up the structure to retrofit new systems. And many were underbuilt to begin with. This job suffered from all of the above.

On this job, most of the structural problems could be traced back to breaks in the load path, which can be devastating to the integrity of a building even if it doesn’t collapse. The effects go beyond plaster or drywall cracks; they manifest in walls and floors that noticeably sag, in floors that bounce and squeak, and in doors that don’t fit their openings and shake the walls when slammed. 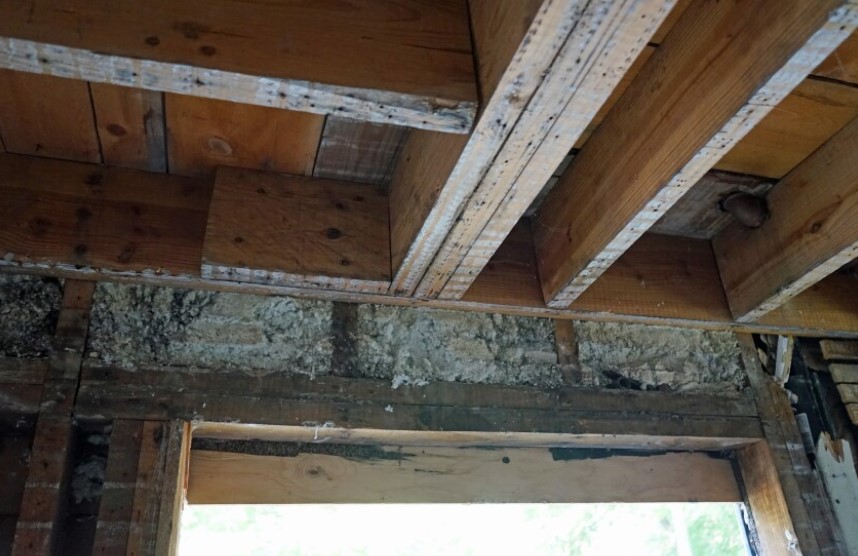 Slideshow: Breaks in the Load Path

Loads on a building must be supported by a complete load path that effectively transfers loads “from their point of origin through the load-resisting elements to the foundation,” as it’s described in Chapter 3 of the International Residential Code. In general, the load transfer needs to be continuous from roof through walls and headers, as well as floors, beams, and columns, to the foundation. Rafters and joists should align with studs, and all load-bearing walls and floor loads must be supported by foundation walls and footings or with beams supported by columns to footings. The alignment of structural members is the best way to effectively transfer gravity loads, but the loads are not all from gravity. Lateral loads and uplift forces require connections between members that are tight (wood-to-wood) and tied securely together with fasteners. In our repair work, we hardly ever toenail permanent connections; we rely exclusively on steel clips, corners, and straps fastened with structural screws.

On this job, we were called in to execute an engineer’s design for reinforcing a number of key components in the load path (see "Breaks in the Load Path," slideshow above). We addressed five critical areas of the structure: 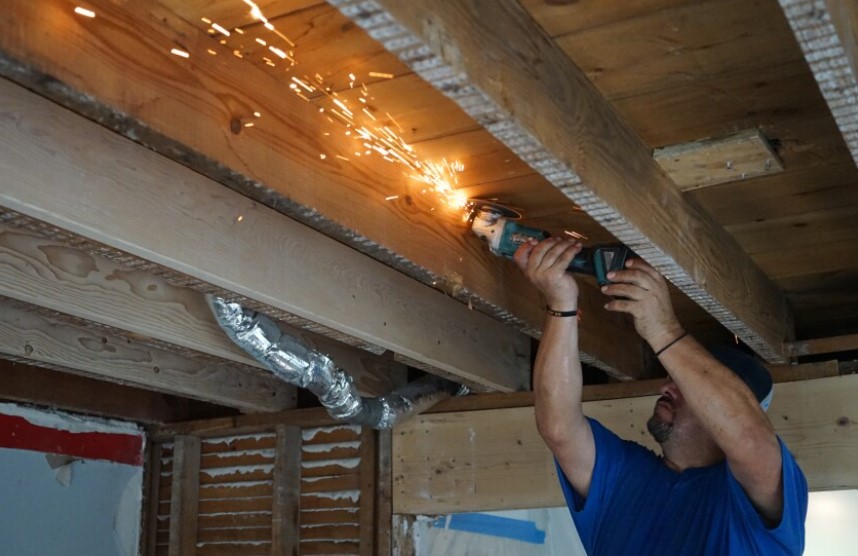 From the Ground Up

As a rule, you want to approach a load-path repair by starting at the bottom and then lift the structure from a solid foundation. On this job, we began by excavating and pouring a new column footing in the basement, so we would have a stable base to build from once we raised the structure.

Reinforcements needed. Before jacking anything up, we first needed to sister the undersized floor joists in the second floor (see "Sister Support," slideshow at right). We wanted to create a flat floor system so that when we started to lift the structure from the basement, the floor would rise uniformly and we would be able to accurately measure our progress. This would have been impossible with the extent to which the existing floor sagged. 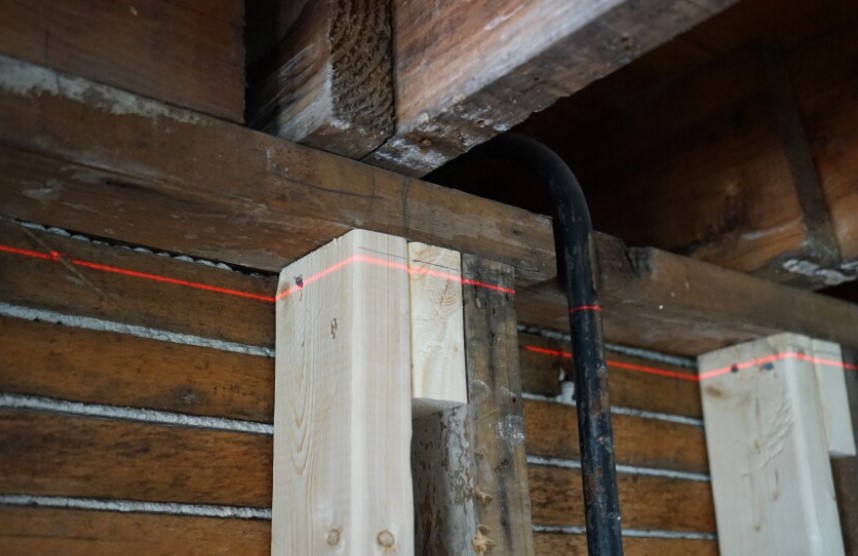 We also strengthened the unsupported bearing wall section mentioned above. The top and bottom wall plates had sagged at each stud, and the studs themselves were bowed. By reinforcing the wall with additional, plumb studs, we could reliably lift from below, knowing that everything would stay straight and the lifting force would be effectively transferred, raising the structure as a whole.

Basement I- beam. Before lifting, we installed a new steel I-beam spanning between the two existing basement girders. This new steel beam was positioned directly under the previously unsupported wall section; it would support the corner column at one end of the flush beam as well as the column at one end of the undermount beam. Jacking up this new beam to level straightened the wall plates and lifted the reinforced second floor as well. 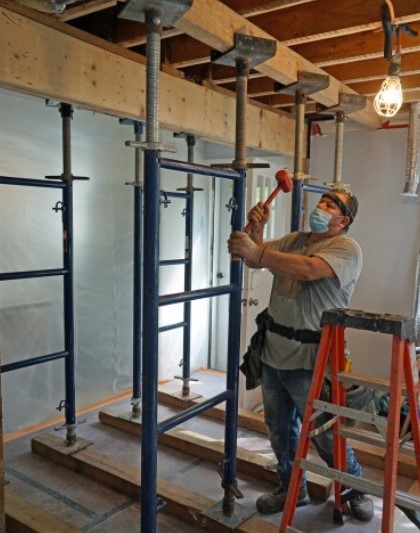 Two new LVL beams. Once the main floor elevation was established, we could install a new flush beam, built up from four LVL plies, and a new undermount beam, made from two LVL plies (see "Two New LVL Beams," slideshow at right).

The final step on this project was to rebuild the floor where the plumbers had hacked it up. This required adding headers across joists to carry the loads around the plumbing so we could remove the cut-up joists. It was painstaking work, as it’s difficult to screw off framing hardware in such tight spaces. Nevertheless, it’s critical to follow through with tight joints and all holes in the hardware filled with screws. 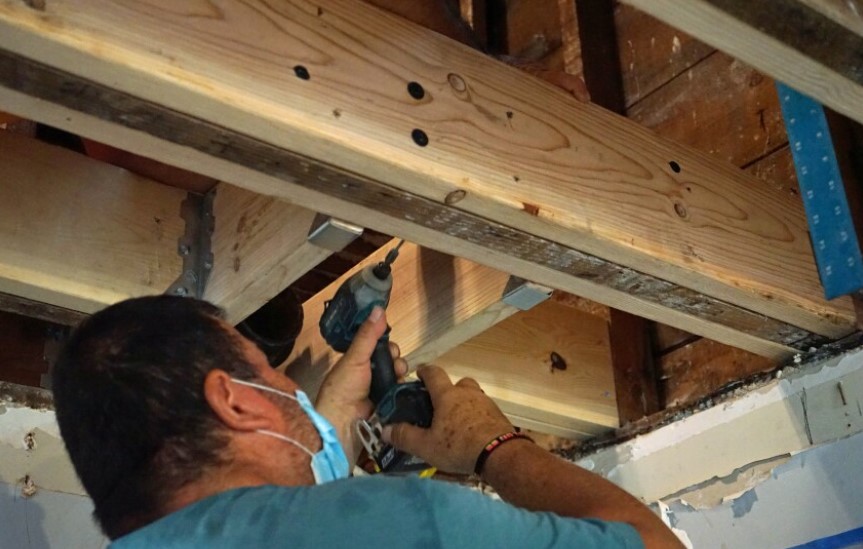 Slideshow: Framing as a System