Originally Published by: Frame Building News — December 16, 2021
SBCA appreciates your input; please email us if you have any comments or corrections to this article.

This article series has aimed to make clear metal-plate connected wood trusses are incredibly efficient at spanning large distances, but can buckle out of plane if not handled and braced properly during installation. A previous article (see Frame Building News, August 2021, p. 8) explored the guidance provided in the Building Component Safety Information handbook’s B1 chapter (BCSI-B1) regarding setting, restraining, and bracing an initial set of trusses to provide a stable system to which subsequent trusses in the system can be braced. This article will look at the industry best practice guidance found in BCSI-B2 on installing temporary restraint and bracing beyond the first truss system.

BCSI-B2 starts out stating:
“Proper truss erection, installation, restraint and bracing requires an understanding of triangulation within and
between the various planes of the truss (i.e. top chord, bottom chord and web). It is critical to note that all lateral restraints must be braced. Lateral restraint by itself is not adequate to resist buckling forces in the members to which it is attached without the rigidity provided by bracing. Bracing is typically provided by adding diagonal bracing within the same plane of the lateral restraint or by anchoring the lateral restraint to a lateral force resisting member such as a shear wall.”

Lateral restraint is vitally important, as it is the primary mechanism used to keep the trusses in plane during installation as they counteract the lateral (or shear) forces caused primarily by wind or installers as they interact with the trusses. However, the key statement in the paragraph above is, “lateral restraint by itself is not adequate to resist buckling forces,” and this becomes more of an issue the longer the truss span.

The reason lateral restraint is not adequate is due to the way in which load is transferred through the various planes of a roof system during installation. Without exterior sheathing and permanent bracing installed, shear load will travel primarily parallel to the top chord plane (or bottom chord plane) of the truss system. What this means in practical terms is lateral restraint may appear effective in the short term at keeping individual trusses in plane during installation. But used exclusively, it is not adequate for significant or sustained shear forces because the load is traveling through the system in the same direction as the restraint. In other words, the lateral restraint will not provide sufficient resistance causing the trusses to, at best, buckle out of plane, and at worse, collapse. 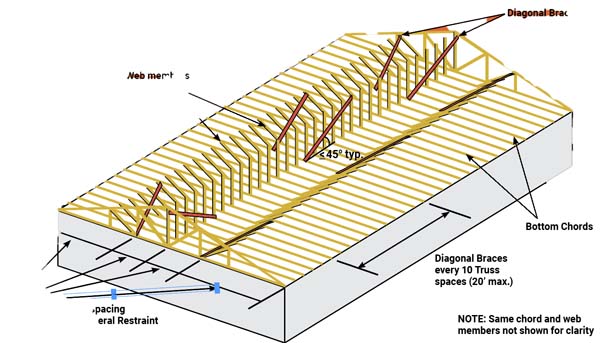 As B2 states, triangulation is the key to solving this outcome. By adding diagonal bracing to the lateral restraint (see Figure B2-28 and Photo B2-5), an installer is introducing another path the lateral shear load must travel. Instead of moving in a straight line across the top chord plane, for example, the diagonal bracing will transfer some of that load back on itself and at an angle. Much like how each individual truss uses triangulation to alternate members in compression and tension to transfer load efficiently to bearing locations, the combination of lateral restraint and diagonal bracing transfer lateral shear loads throughout a plane of the roof system.

Beyond the Top Chord 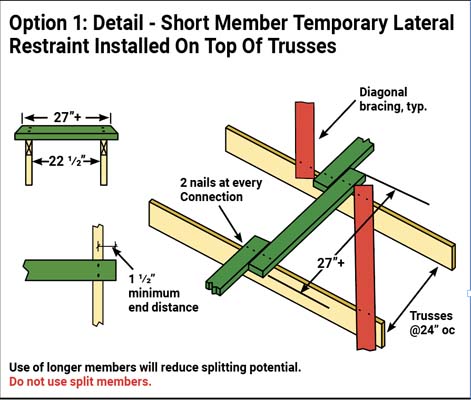 Adding diagonal bracing in the web member plane provides considerably more stability than applying diagonal bracing on the top and/or bottom chords.  This added stability can become increasingly beneficial as the span of the trusses grows and the potential for buckling increases.  Applying web member bracing is also beneficial because it does not have to be removed when exterior sheathing is applied, allowing it to become part of the truss system’s permanent bracing (see figure B2-34).

The same can be said of bottom chord temporary lateral restraint and diagonal bracing.  When used, it not only provides important stability to the system, but it also helps maintain proper spacing between trusses and ensures the bottom chords of the trusses in the system remain parallel over their entire length.  When applied to the top edge of the bottom chords, this lateral restraint and diagonal bracing can also become part of the truss system’s permanent bracing (see figure B2-35).

Following this guidance will greatly reduce the chance an individual truss buckles or a truss system fails. This assumes that all lateral restraints and diagonal braces are applied with adequate connections.  B2 recommends that unless otherwise specified by the building designer, all restraint and bracing material should be 2×4 stress-graded lumber, or approved proprietary metal restraint/bracing, and affixed using 2-10d, 2-12d or 2-15d nails.

All nails should be driven flush into the restraint and bracing material (see figure B2-12, double-headed/duplex nails can be used for easier removal). Finally, a minimum of two nails should be used to attach each restraint/bracing to each truss, being sure not to split the ends of the material.  Often, it is advisable to use members slightly longer than necessary to allow a nailing pattern that does not get too close to the end of the material (see figure B2-25).

The application of lateral restraint during long-span truss installation is not adequate to resist shear loads. Applying diagonal bracing to the top chord, web members, and/or bottom chords provides necessary resistance through a process called triangulation. Diagonal bracing applied in the web member plane, and to the top edge of the bottom chords, can provide significant resistance not only during installation but throughout the life of the building. All lateral restraint and diagonal bracing should be affixed using fully-embedded nails of a sufficient size and quantity to unsure they resist lateral shear loads as intended.