Originally Published by: CalculatedRisk Newsletter — February 10, 2022
SBCA appreciates your input; please email us if you have any comments or corrections to this article.

With the ten-year Treasury yield above 2.0% this morning, and mortgage rates nearing 4%, a key economic question is: What will be the impact on housing of higher mortgage rates?

First, housing is a key transmission channel of Federal Reserve policy. I discussed this back in 2012: Analysis: I expect QE3 on Sept 13th [2012]

[O]ne of the key transmission channels for monetary policy is through residential investment and mortgages.

Of course, in 2012, we were discussing how Fed policy would boost housing. Now, Fed policy - higher rates, halting asset purchases, allowing runoff of assets (not reinvesting), and even selling assets - will slow housing.

For mortgages, an immediate impact of higher rates is less refinance activity. We are already seeing this in the Mortgage Bankers Association’s (MBA) refinance index. From the MBA: Mortgage Applications Decrease in Latest MBA Weekly Survey

The Refinance Index decreased 7 percent from the previous week and was 52 percent lower than the same week one year ago. … 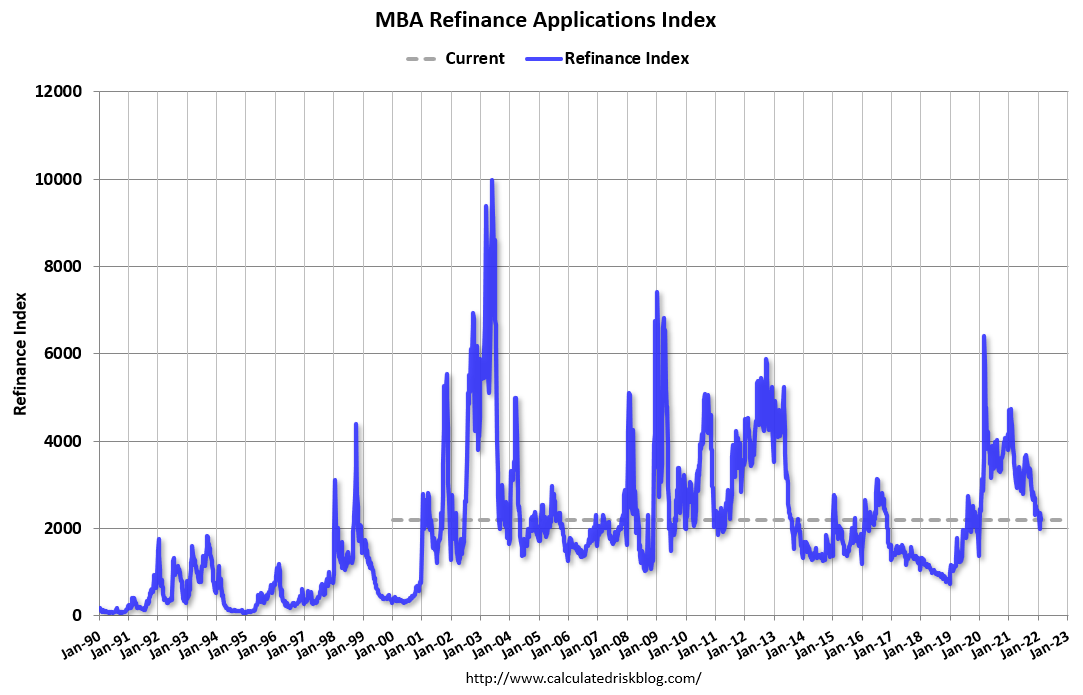 There are two impacts of less refinance activity: first, homeowners can no longer refinance to lower their mortgage payments, thereby increasing their monthly cash flow, and second, homeowners are less able to use their home as an ATM (cash-out refinance) unless they are willing to accepts higher monthly payments. Both of these channels have boosted economic activity during the pandemic.

There are other periods when rates increased - like in 1999 - and new home sales only declined slightly. Here is a graph of 30-year mortage rates. The arrows point to the three periods mentioned above. 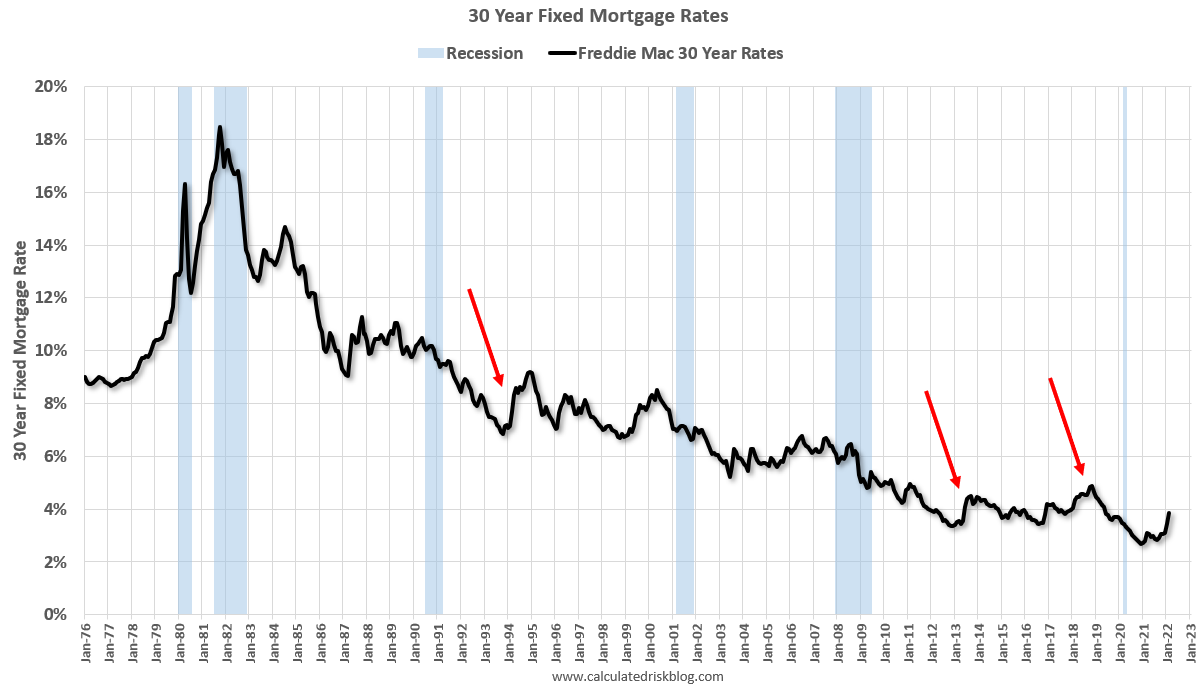 And here is a graph of new home sales with arrows pointing on the same periods. 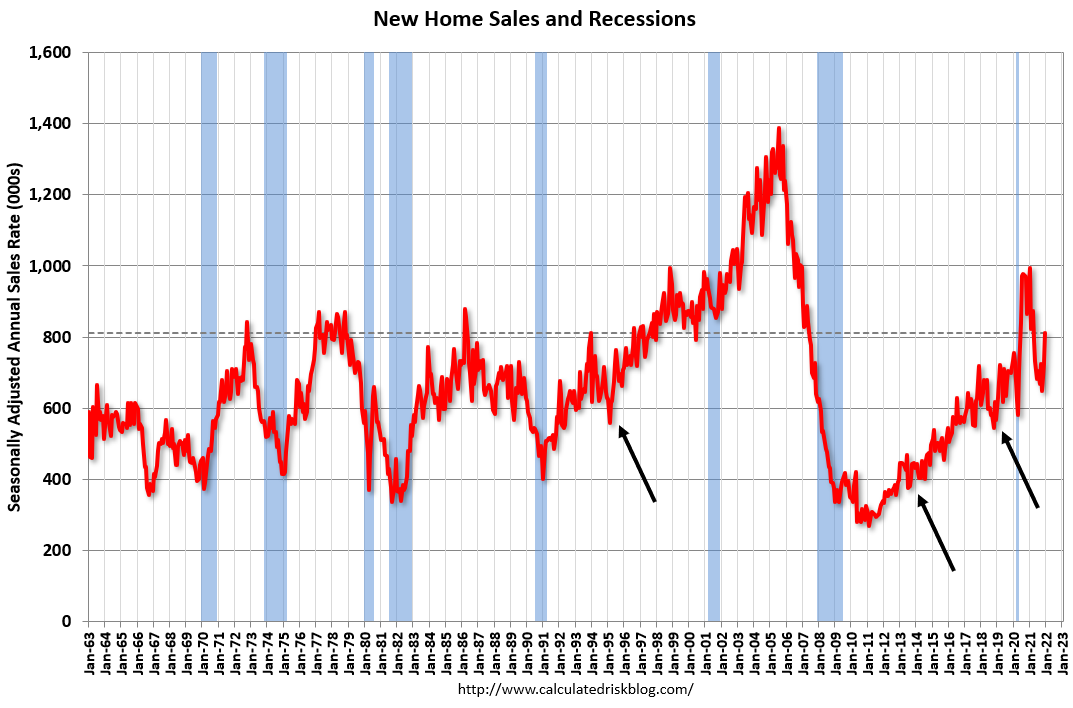 The decreases in new home sales during periods of rising mortgage rates mostly look like noise on this graph (there are other factors impacting sales). However, it seems likely - based on history - that we will see a decline in new home sales from recent levels. 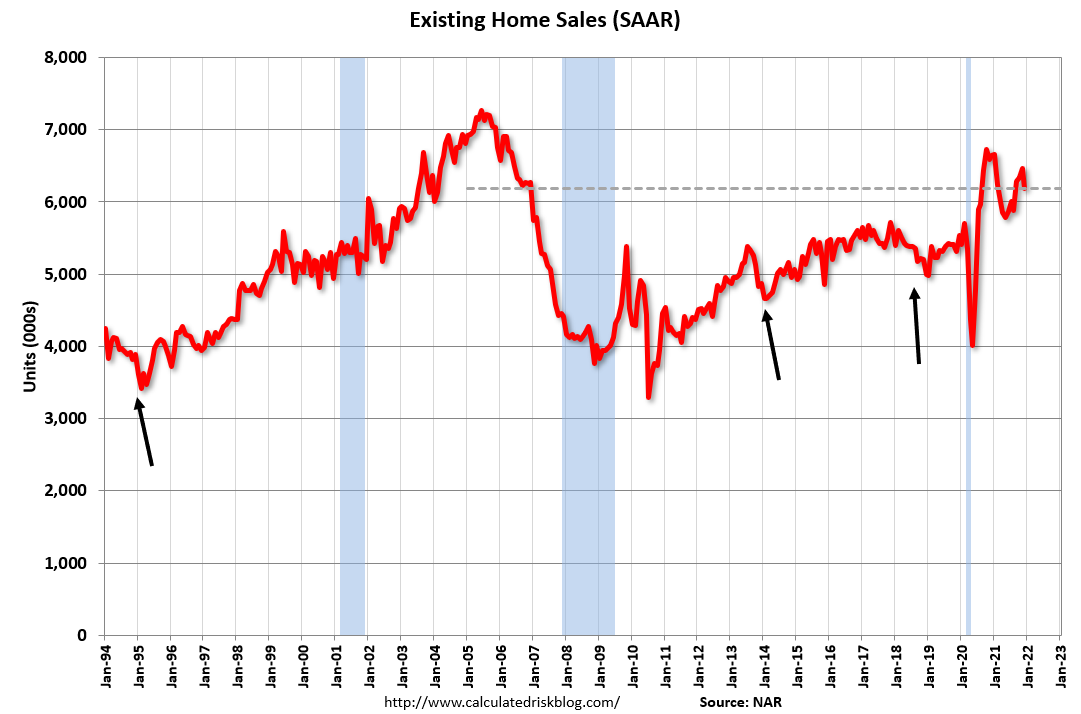 There are other factors impacting new and existing home sales, but it seems likely we see some slowing in purchase activity.

Looking back at these previous periods of rising mortgage rates, months-of-supply increased for both existing and new home sales, due to the decrease in sales, but overall inventory didn’t increase significantly.

If sales slow over the next several months, watching inventory will be key. It appears months-of-supply will increase (based on previous periods of rising mortgage rates), but it will be important to watch actual inventory levels. 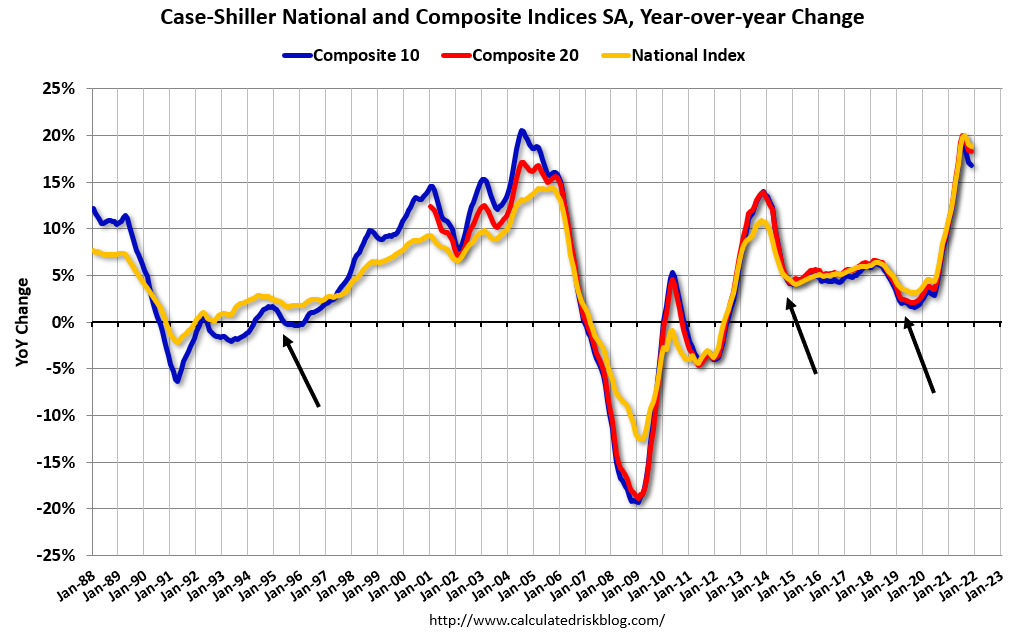 We will probably see house price growth slow in the coming months (perhaps significantly). House price data is released with a lag, so it might take several months before we see the impact on prices.

With 4% 30-year mortgage rates, we will likely see a slowdown in both new and existing home sales (based on previous periods of rising rates). It also seems likely house price growth will slow. However, the impact on inventory is unclear.

There is further downside risk if mortgage rates continue to increase, or if we see a significant increase in inventory (something we didn’t see in previous periods of rising mortgage rates).