Map: 1-in-4 New Home Locations are Infill or Teardowns

Originally Published by: Eye on Housing — December 9, 2021
SBCA appreciates your input; please email us if you have any comments or corrections to this article.

According to the latest Annual Builder Practices Survey (ABPS), one in four new single-family detached homes were built in established neighborhoods in 2020. This includes 19% of new homes that were built on infill lots and 6% that involved tearing down an old building prior to building a brand new single-family detached home. These shares vary significantly across the United States. In 2020, teardowns and infills accounted for almost half of the new-home market in New England but their prevalence in the Midwest was under 20%. 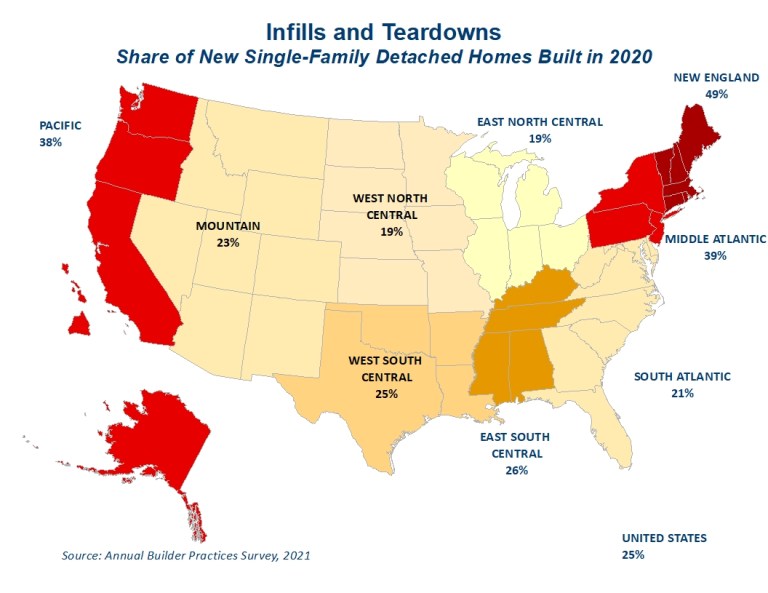 At 18.6% of the new single-family detached home market, homes built on infill lots in older neighborhoods are a substantial part of the market. The North East and Pacific stand out for registering significantly higher market shares for infill homes. In New England, more than a third (34.6%) of new single-family detached homes are built on infill lots. The market share of infills in the Middle Atlantic is almost 30%, followed by the Pacific (24.1%). At the other end of the spectrum is the Midwest, where the market share for infill homes is just above 12%. The lack of developable land is likely to boost infill development and helps explain its relatively high market share. Given the record high and growing lot shortages reported by the September 2021 survey for NAHB/Wells Fargo Home Market Index (HMI), new homes built on infill lots will likely command a growing share.

Teardowns play a smaller role in the new home market. The current market share of 6.4% is actually lower than the shares NAHB reported for teardowns in 2015 (7.7%), 2016 (10.2%) and 2017 (6.8%) based on the special questions appended to the HMI surveys at that time. The highest market share of teardowns is again in New England (14.4%), followed by the Pacific (13.4%) and Middle Atlantic (9.3%).The substantial regional differences in the market shares of teardowns reflect the diverse age of the housing stock, distinctive climate effects on housing durability, as well as varying severity of developable land and lot shortages in different regions. 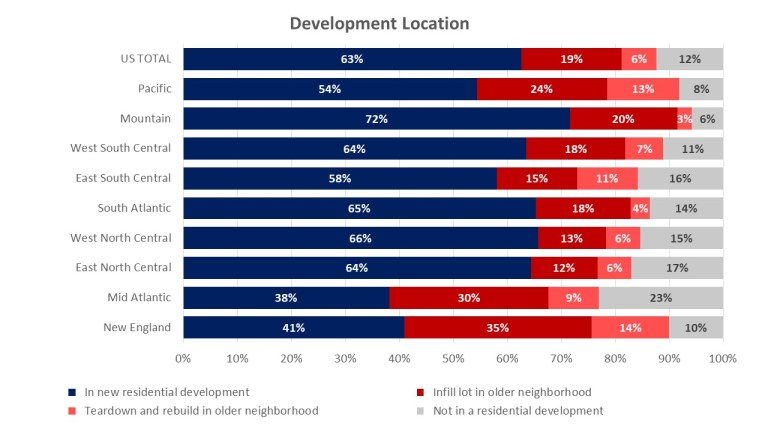 The majority (63%) of new single-family detached homes built in 2020 were in new residential developments. Not surprisingly, the three divisions that stand out for the highest market shares of new homes built in existing neighborhoods build less in new developments. In the Middle Atlantic, only 38% of new single-family detached homes were built in new developments. The New England and Pacific divisions follow with 41% and 54%, respectively. At the other extreme is the Mountain division where close to three quarters (72%) of new homes were in new residential developments.