Originally Published by: Soo Today — February 11, 2022
SBCA appreciates your input; please email us if you have any comments or corrections to this article.

A new manufacturing business in Sault Ste. Marie got a boost through provincial government funding, enabling it to retrofit an existing building, purchase new equipment and create jobs. 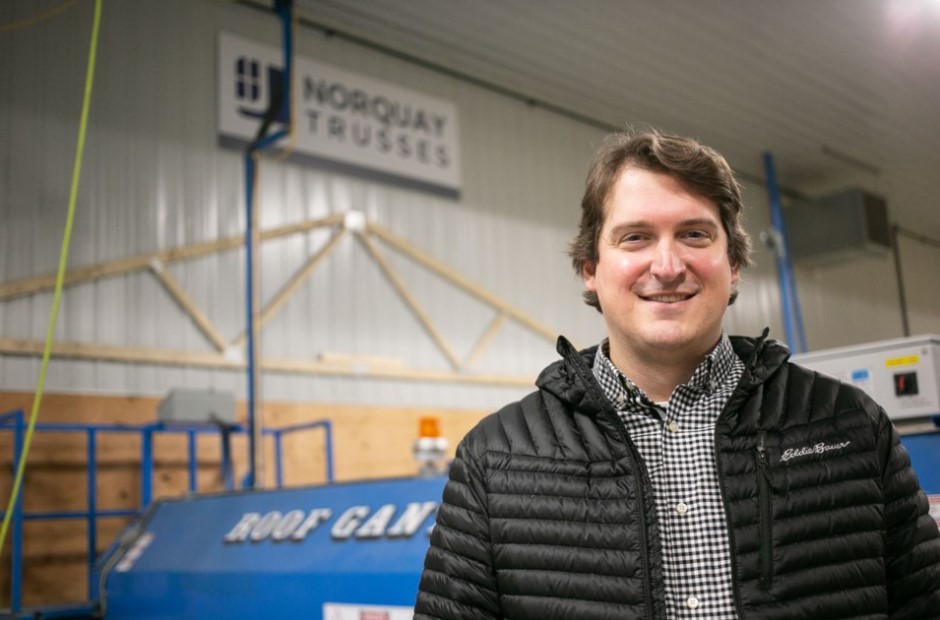 Scott Beaumont is the president and GM of Norquay Trusses Ltd., a sister company of Lyons Timber Mart. A recent investment by NOHFC allowed the company to expand and retrofit an existing facility, purchase equipment and hire additional staff.Kenneth Armstrong/SooToday

Norquay Trusses is a recently-incorporated sister company of Lyons Timber Mart. The company spent about $2 million to expand and retrofit a storage facility at 540 Dundas St. into a manufacturing facility for producing pre-built roof trusses used in the construction industry.

Lyons Fuel, Hardware and Supplies Ltd. was first incorporated in the Sault by James Lyons in 1913 and the company was purchased in 1958 by Richard Beaumont. It was later purchased in 1992 by his son David Beaumont.

Now a new generation is overseeing the company that has been in operation for almost 110 years.

“We have been looking into this industry since the 90s actually, going back to my father,” said Scott Beaumont, president of Lyons Timber Mart and Norquay Trusses about expanding into the forestry manufacturing sector. “We decided it was a good time because the demand is strong and it’s a good time to enter the market.”

The new sister business takes regionally-sourced lumber to create value-added roof truss product for use in the construction industry.

The company offers just-in-time delivery of the roof trusses and will ramp up production in the spring.

“When we get to May we will have a full shift, which will be about 12 people here plus our design and management staff, which is another six or seven people,” said Scott. “As we look to grow, we will be looking at a second shift, which will add to the seasonal work.”

Romano said Norquay Trusses is a classic example of businesses helped by NOHFC investments because it allowed for the expansion and retrofitting of an existing building to allow for a local business to expand and hire more workers.

“In the north it’s one of our few competitive advantages,” said Romano of NOHFC. “A $100-million fund that allows these kinds of projects to move forward and allows us to diversity our economy, which is obviously very important.”

“Our government is proud to invest in local businesses that support the province’s forestry sector, create jobs and keep the North competitive,” said Greg Rickford, Minister of Northern Development, Mines, Natural Resources and Forestry in a press release. “With this investment, we will help address increasing market demand for wooden building materials in Canada and the United States.”