Originally Published by: Webb Analytics — February 15, 2022
SBCA appreciates your input; please email us if you have any comments or corrections to this article.

Pro-oriented, residentially focused construction supply companies acquired 671 locations and opened 154 others in 2021, capping one of the busiest years for ever for lumberyards, specialty dealers, and related firms, Webb Analytics’ just-released 2021 Deals Report finds.

This year’s version of the consulting company’s annual report counts 148 mergers and acquisitions last year by 73 entities. That’s a 21% increase over the number of lumber and building material (LBM) sector deals in 2020. Meanwhile the number of greenfield openings more than doubled 2020’s total. 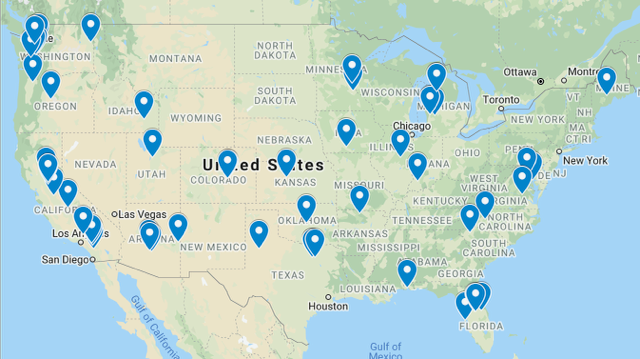 In 2021, there were 55 new LBM millwork, truss, or components plants across the country. Of those, 34 locations were acquired and 21 were greenfield operations.

“One-sixth of last year’s openings, as well as 78% of the larger-than-usual 67 closings, stem from what has happened since Builders FirstSource and BMC merged in January 2020,” Webb Analytics President Craig Webb said. “You also might say the count was affected by an expanded definition of what we call a construction supply firm. But the core areas—lumber, roofing/siding, and drywall—showed robust growth on their own.”

The report, downloadable for free at www.webb-analytics.com, chronicles a year that stirs memories of the roll-up days of the early 2010s, when ProBuild and Stock Building Supply took over scores of companies before they stumbled during the Great Recession and ultimately became part of BFS. In those days, the buyers were relatively few. Today’s era, by contrast, appears to have a large number of suitors, including regional players like TAL Holdings and Pleasant River Lumber as well as national giants like US LBM and SRS Distribution. 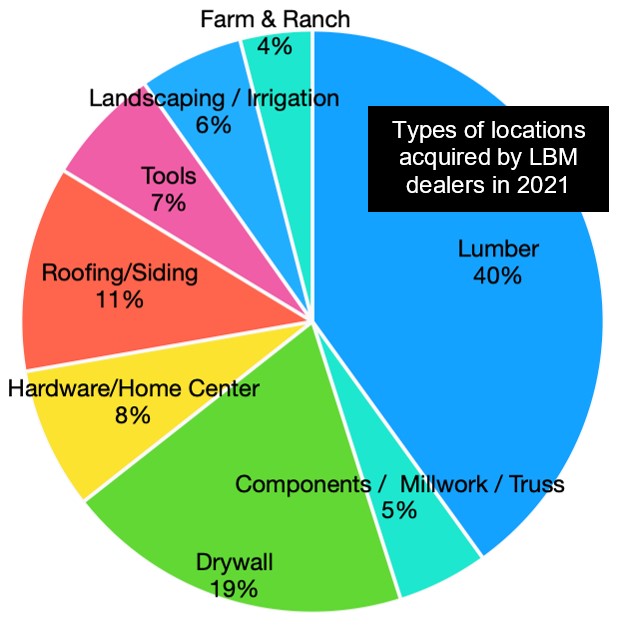 In general, the report covers actions at the types of companies where a pro would shop. It also counts otherwise excluded areas if a traditional pro dealer has ventured into that space. That’s why farm and ranch shows up—because R.P. Lumber bought a chain. Landscaping gets tracked because SRS Distribution owns Heritage Landscape Supply. But the report omits SRS’ recent plunge into the pool supply business. The report’s geography is limited to the U.S. unless a U.S.-based dealer moves into Canada, as GMS did eight times in 2021.

“This widening circle of targets no doubt figures into some of the overall increases since 2018,” Webb said. “But if you focus solely on what happened lumberyards, component plants, drywall outlets, and roofing-siding operations, it’s clear that M&A activity has grown, particularly for lumberyards and at manufacturers that produce trusses, panels, and millwork products.”

Here are the acquisition counts since 2018 for four different LBM sectors:

Which Companies Bought the Most

Both the SRS Distribution/Heritage Landscape combo and US LBM did three times as many deals as the six apiece done by 2020’s leaders. In 2021, US LBM was far and away the leader in terms of total branches acquired. Add GMS to SRS and US LBM and you have the three companies that figured in 28.4% of the 148 deals and 43.6% of all the yards acquired.

The average transaction in 2021 involved 4.5 locations. That’s way below 2020’s average of 8.7, when the merger with BMC landed BFS 164 more yards all at once. But 2021 beats the averages for 2018 and 2019. There were 10 deals that brought in more than 10 locations., GMS had the biggest single purchase, acquiring Ames Taping Tools. US LBM and SRS had four of the next nine.

There were 55 new LBM millwork, truss, or components plants across the country. Of those, 34 locations were acquired and 21 were greenfield operations.

In general, the more retail-oriented your LBM business is, the more likely you are to open a greenfield operation. This shows up in particular in flooring, where LL Flooring and Floor & Decor opened a total of 31 locations this year.

As in 2020, Texas led the nation last year in facilities that changed their status, with 103 total—80 through acquisitions, 21 via openings, and just two closures. California again finished second at 80 facilities, 60 of them through deals But after that came some surprises. Minnesota sneaked past Florida for No. 3 and Illinois came in fifth.

Though we’re just six weeks into the new year as of when this report was published, we’ve already seen 61 locations involved in deals, particularly National Lumber and R&S Supply.

The Deals Report also compared Builders FirstSource’s current facility lineup with the locations that Webb Analytics recorded BFS and BMC as having in their online directories in 2019, well before the dealers’ mega merger on New Year’s Day 2021. The comparison turned up 53 former BFS and BMC locations that are no longer on BFS’ list of open yards, 24 new locations, 36 locations added in acquisitions, and 13 facilities that were sold.

“BFS always planned to close some operations and refresh others following its merger with BMC,” Webb said. "Overlapping markets like Atlanta, Dallas, and Charlotte seemed like obvious locations to shut redundant facilities. Rather, what were cut were standalone design centers (often relocated to nearby yards), and a lot of small-town locations, like Breese, IL; Elkader, IA; Bemidji, MN; and Evansville, WY.” Some of these yards might have been dormant long before the merger, but now they’re officially gone.