Understand the Space Between

When A. Carol Sanford submitted his patent application for the first toothed metal connector plate on March 5, 1954, he had a good understanding of how the wood truss functioned. While the structural components industry was born from his concept, it’s unlikely Carol could have imagined what today’s truss designs can accomplish. While connector plates have improved in important ways over Carol’s initial patent, most of the innovation that has occurred in truss design may be due to the awesome computational power of modern truss design software.

Yet, even though software is the linchpin in today’s component manufacturing operations, its outputs are only as good as the human beings—the truss technicians, designers, and engineers — who input the data, adjust the settings and parameters and review the final design. Most component manufacturers (CMs) thoroughly train for that first aspect and differentiate themselves in the market with the second, but sometimes the third aspect doesn’t get the attention it needs and deserves, especially relative to the logic built into the software.

Take tributary area as an example. Trusses are designed in the software as two-dimensional, structural components. Each component is automatically loaded by the software. It’s important to keep in mind this auto-loading is only as good as past framing conditions that software providers can plan for and the level modeling the user has applied. If the framing conditions were not planned for, or the model does not reflect how it will be built, there is little chance the auto-loading is correct. In those cases, the software user needs to step in and manually load the trusses correctly. To that end, tributary area is an essential piece of context to understand.

Let us start with an example of a truss system where all the trusses run in the same direction (see Figure 1). Typically, each truss is designed to support one-half of the (roof or floor) load on each side. If the distance to an adjacent Truss B is 30” on one side, and 18” on the other side, the maximum design spacing would be the sum of one-half of the 30” (15”) and one-half of the 18” (9”), which, added together, equals 24”.

This is the maximum tributary spacing the truss is designed to carry. This is key because when one adjacent truss is 30” away and 18” on the other, the tributary load is the same for the truss as when the adjacent trusses are both 24” away such as in Truss A in Figure 1. 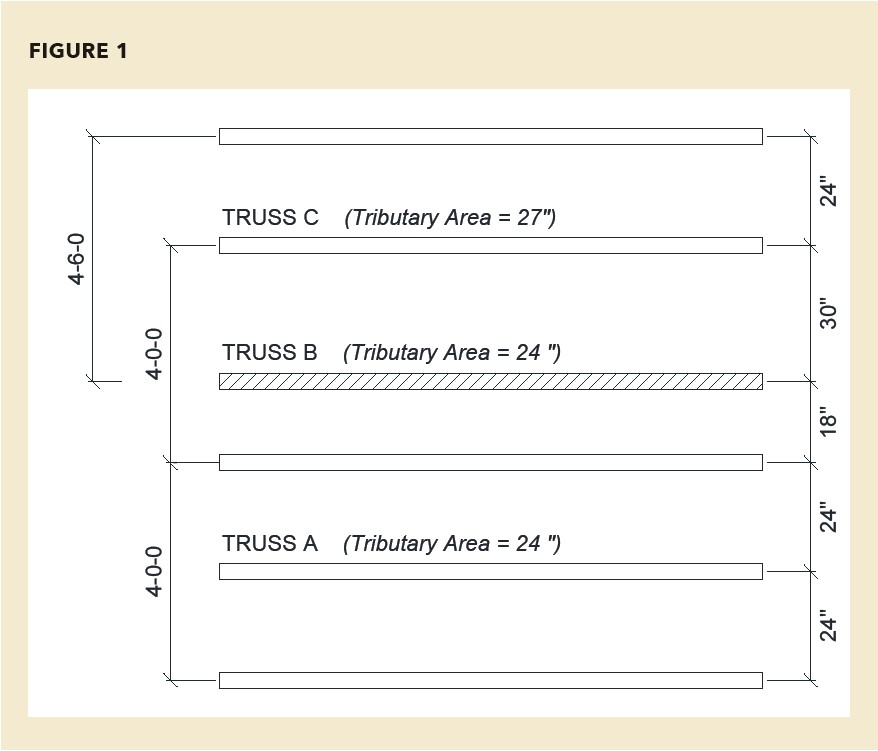 In general, the use of tributary area is a simplified method to efficiently partition area loads to individual structural elements. While it is accurate for repetitive runs of trusses, it is common for variations in truss configurations, bearing locations, and additional framing to occur, all of which alter the load distribution presumed by the tributary area method since these things can cause changes in load paths. In some cases, the change is large enough that the tributary area method may not be accurate. Framing perpendicular to the truss typically causes this to occur.

A common situation where the truss system is not made up of trusses all running in the same direction is with girder trusses. Figure 2 provides an example of a girder truss with perpendicular jacks. In this illustration, the diagonal hatch lines represent the tributary area (half the distance to the adjacent truss) of the girder and a carried truss. The girder is spaced at 2’ on center (o.c.) from an adjacent truss, so the truss designer would input a 2’ o.c. spacing. The software would then assign the girder a 2’ tributary loading spacing, based on one foot of loading on either side. 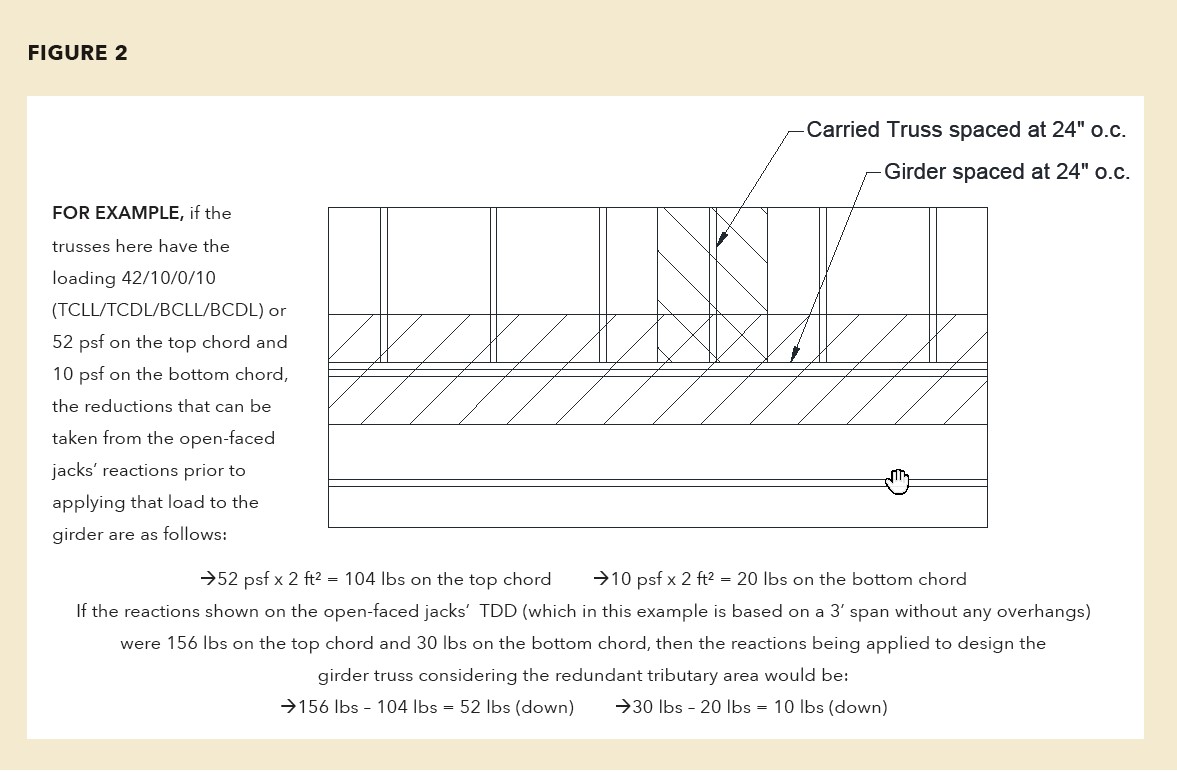 This matters because it’s inefficient to design for the same load twice. However, it’s important to know that different design software packages will handle this situation differently. One software may take a reduction equal to the load over the shaded area on the carried truss reaction before applying it to the girder truss, while others may not. In any case, the dimensions of the shaded area are half the spacing of the girder truss and the full spacing of the carried trusses. Or for trusses 24” o.c., one foot by two feet, which creates an area of 2 ft2.

If the truss and girder tributary spacings are accurate, this adjusted reaction is handled automatically by the logic built into the software.

Typically, trusses are spaced evenly, with the TDD showing the maximum spacing. Occasionally, even spacing may put a truss directly in the path of an obstruction or some mechanical, electrical, or plumbing (MEP) infrastructure. A simple solution is to shift the trusses to avoid the MEP.

Again, these examples on tributary area above should illustrate that while it is possible, it is important to understand the impact a shift may have on the design of that truss and the adjacent trusses. It should also be noted that any shift may also have a practical impact on the installation of floor sheathing or ceiling diaphragm material.

Figures 3 and 4, show how moving a single truss can affect the tributary area of the adjacent truss, thus affecting the amount of load it carries. Instead of carrying 2’ of tributary spacing as designed, the adjacent truss now carries 2’ 1-1/2” of tributary spacing. Depending on how close the combined stress index (CSI) values and joint stress index (JSI) values are to 1.0 on the original truss design, increasing the o.c. spacing to reflect the new tributary could lead to overstressed lumber and/or plates. 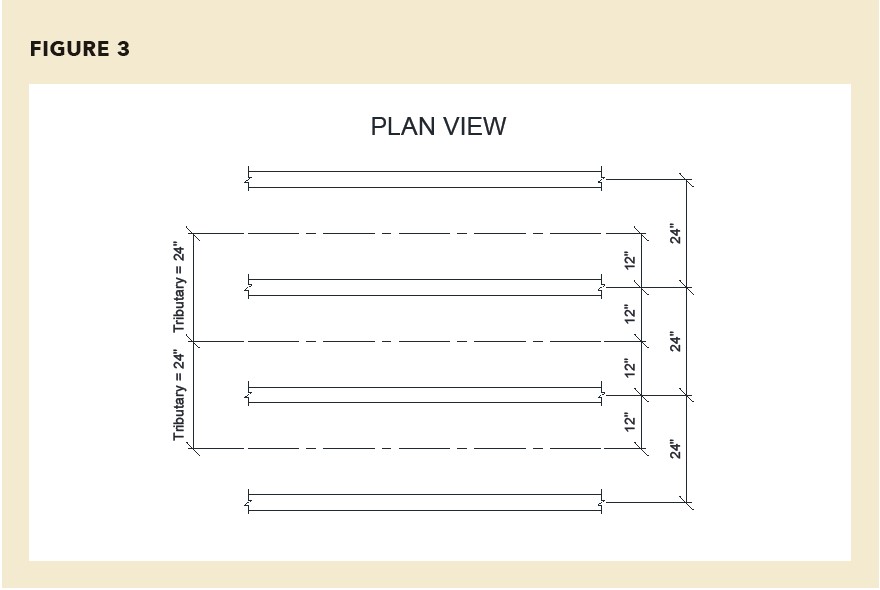 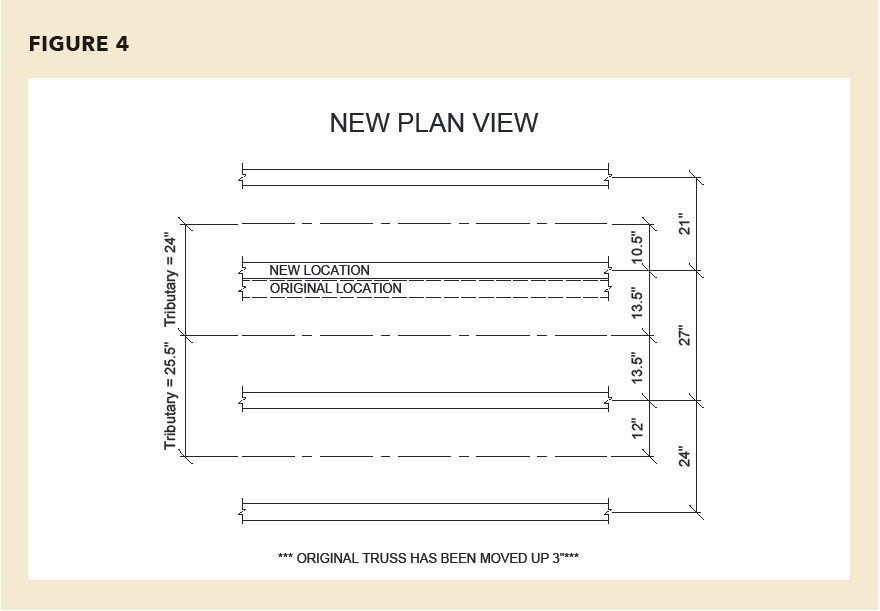 In addition, in this example the ability to apply repetitive increases to allowable stress is lost. Section 6.4.2.1 of ANSI/TPI 1 National Design Standard for Metal Plate Connected Wood Truss Construction specifies that repetitive member design values cannot be applied to trusses spaced more than 24” o.c. These repetitive increases may have permitted increases in some allowable stresses of up to 15 percent. This means that even designs with CSI values low enough to offset the given increase in loading (for example, just over 6 percent in Figures 2 and 3), may still be overstressed due to the inability to apply repetitive stress increases for trusses spaced 2’ o.c.

As a side note,there may be situations where the tributary area method is considered overly conservative, and variations are allowed based on engineering judgment. For example, when a roof truss system with 24” o.c. spacing needs a truss, or two, to be moved slightly to address an obstruction, some engineers may judge the movement to be negligible with respect to their effect on loads and the presence of a repetitive system, even though this may not explicitly comply with code provisions like the 24” o.c. spacing limit for repetitive increase. Under Section 6.4.2.1 of ANSI/TPI 1, the truss may have to be re-designed to accommodate the more conservative (greater than24” o.c.) tributary spacing, requiring an increase in loads without the repetitive system benefits. The argument that the truss design based on 24” o.c. spacing remains valid for such a movement is outside the scope of TPI 1, so claims to this effect are not likely universally accepted but may be in some instances. Until interpretations like this are accepted in some code-referenced document, it is likely that this will remain controversial with respect to either permitting any increases in loading than that defined earlier by its tributary spacing and/or use of repetitive member factors if any adjacent spacing exceeds 24” o.c.

All of this is to say, it is important to understand how tributary area works. While the methodology described above is not standardized, and there is no assurance that it is acceptable without prior approval from the responsible engineer of record, it may still be an option even if it’s one the software will not flag for you.

Today’s truss design software is incredibly powerful, but it is only as good as the humans who created and use it. In the case of tributary area, truss layouts are handled by the algorithms programmed into the software. However, those algorithms contain approximations so there are still situations where the software user needs to verify the tributary area, particularly on complicated tributary areas, shifted trusses, and situations with perpendicular framing elements.

At the end of the day, loads can come from the EOR, the software user, or can be auto-generated by the software. For EOR or user specified loads, the user enters the loads, and both their team and EOR verify them. A sealing engineer has no way to verify these loads after the fact. For software auto-generated loads, either the EOR, the user, or sealing engineering (or a combination thereof) must verify the loads. To verify, the truss technician, designer, EOR, and/or sealing engineer needs to review software outputs carefully, particularly the tributary area.

Understanding how tributary area is calculated and applied makes review of this output that much easier and faster. It can also help you evaluate the software settings to determine if this can differentiate your company in providing safe and accurately designed trusses. Finally, it can ensure you catch a potential error in the design phase as opposed to learning it in the field or having a performance issue down the road.

This article is the result of a collaboration between the members of the Truss Plate Institute’s Technical Advisory Committee (TPITAC) and SBCA. It is part of a technical article series driven by TPITAC members that seeks to address pertinent engineering topics and provide design best practices.