Are You Operating in the Most or Least Affordable Market?

Originally Published by: NAHB — October 19, 2021
SBCA appreciates your input; please email us if you have any comments or corrections to this article. 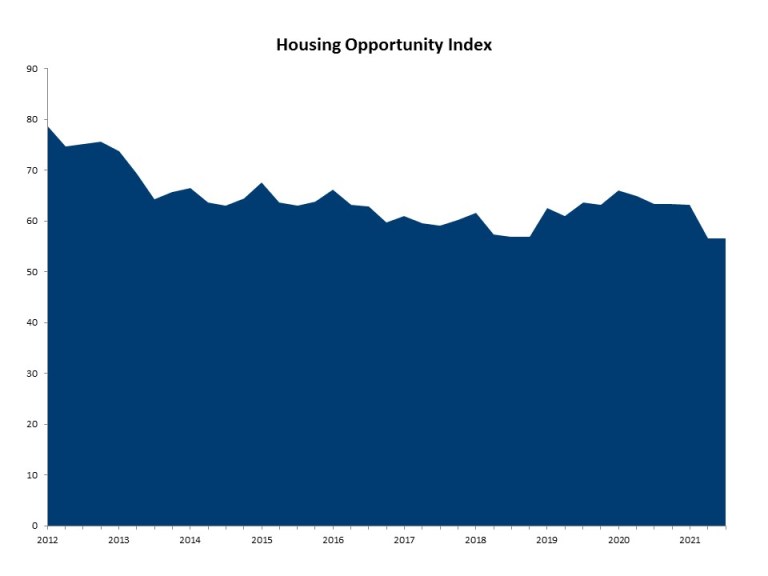 Housing affordability held steady at its lowest level in nearly a decade, as higher home prices offset lower mortgage rates to keep the affordability rate flat in the third quarter of 2021. However, ongoing supply-chain disruptions and the prospect of higher interest rates in the future threaten to exacerbate affordability problems in the months ahead.

According to the NAHB/Wells Fargo Housing Opportunity Index (HOI) released today, 56.6% of new and existing homes sold between the beginning of July and end of September were affordable to families earning the U.S. median income of $79,900. This is unchanged from the 56.6% of homes sold in the second quarter of 2021 and remains the lowest affordability level since the beginning of the revised series in the first quarter of 2012.

“Interest rates are anticipated to gradually rise in the coming months as the Fed begins to taper its monthly bond and mortgage-backed securities purchases,” said NAHB Chief Economist Robert Dietz. “To keep affordability problems from worsening in the future, policymakers need to tackle supply-chain challenges that are hindering new home production. Helping builders boost output will also slow the rapid rise in home prices that has occurred over the past year.”

The HOI shows that the national median home price increased to a record $355,000 in the third quarter, up $5,000 from the second quarter and $35,000 from the first quarter. Meanwhile, average mortgage rates fell by 14 basis points in the third quarter to 2.95% from the rate of 3.09% in the second quarter. However, mortgage rates are currently running above 3.1%, and this higher trend could affect affordability later this year and into 2022.

The Most and Least Affordable Markets

Lansing-East Lansing, Mich., was the nation’s most affordable major housing market, defined as a metro with a population of at least 500,000. There, 89.1% of all new and existing homes sold in the third quarter were affordable to families earning the area’s median income of $79,100.

Meanwhile, Davenport-Moline-Rock Island, Iowa-Ill., was rated the nation’s most affordable small market, with 93.4% of homes sold in the third quarter being affordable to families earning the median income of $76,300.

For the fourth straight quarter, Los Angeles-Long Beach-Glendale, Calif., remained the nation’s least affordable major housing market. There, just 8.3% of the homes sold during the third quarter were affordable to families earning the area’s median income of $80,000.

Four of the five least affordable small housing markets were also in the Golden State. However, at the very bottom of the affordability chart was Corvallis, Ore., where 6% of all new and existing homes sold in the third quarter were affordable to families earning the area’s median income of $93,000.