Originally Published by: NAHB — September 10, 2021
SBCA appreciates your input; please email us if you have any comments or corrections to this article.

Housing affordability has gained increased attention in recent quarters due growing home prices and rents. For the second quarter of 2021, NAHB’s Home Building Geography Index (HBGI) explored a geographic measure of housing affordability using Price-to-Income ratios of all counties in the United States1 to map the geography of single-family and multifamily construction.

The principal findings of this new classification were that single-family residential construction expanded the most in middle affordability tiers, as compared to prior recent quarters, while multifamily residential construction posted higher growth rates in areas of greater affordability. For this analysis, the Price-to-Income ratio is the median value of all owner-occupied housing units in a county relative to that county’s median income.

The above figure shows the geographic distribution of five affordability quintiles, based on the Price-to-Income measure. The top quintile, the most expensive, is situated along the East and West Coasts. The least expensive areas belong mostly to areas in the West North Central and West South Central Census Divisions.

The findings show that since the beginning of the pandemic, growth rates in multifamily construction have been flat in the most expensive housing markets and stronger in more affordable areas. This is consistent with the general suburban shift for apartment construction. For the last two quarters (Q1 and Q2 2021), there was a correlation between submarkets of lower housing affordability and lower multifamily growth. In the second quarter of 2021, in the most affordable regions of the country, multifamily construction posted a 48.3% year-over-year gain. 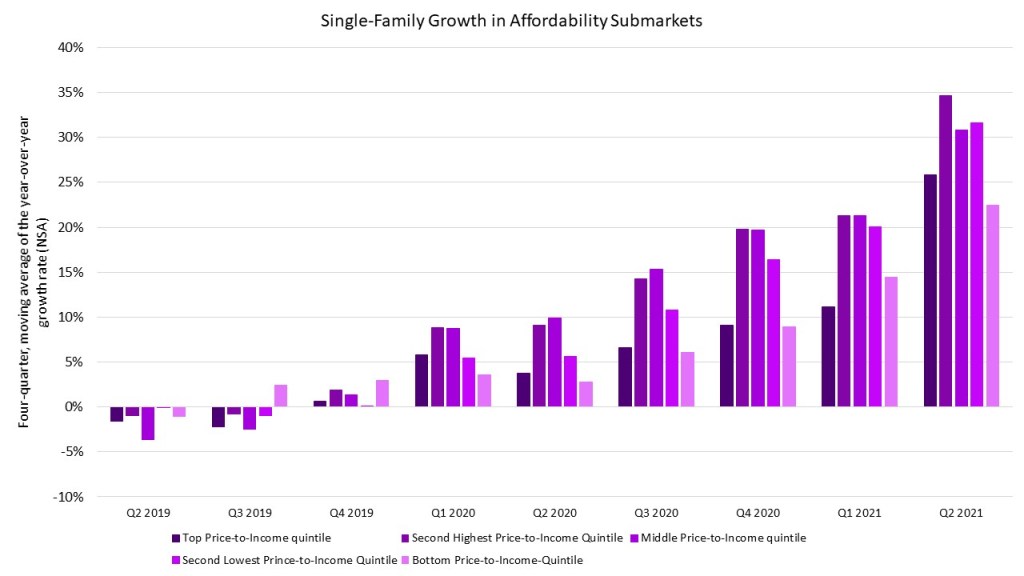 Single-family construction, by contrast and as seen in the figure above, expanded the most in the middle three quintiles, posting growth rates ranging from 31.5% to 34.7% in Q2 2021. The trend of the middle affordability tiers seeing the greatest expansion began in Q1 2020, which suggests it is connected to COVID-19 conditions. Relatively higher growth in the middle quintiles reflects the tug-of-war between demand for housing in areas of traditionally strong job growth, that tend to be more expensive, and the greater ability to actually build and add housing inventory in relatively more affordable markets.