Originally Published by: Source Name — January 5, 2022
SBCA appreciates your input; please email us if you have any comments or corrections to this article.

Southern Nevada Trades High School is scheduled to open in August 2023 on Bledsoe Lane in Las Vegas — initially, with up to 200 students in ninth and 10th grades. It plans to gradually expand. 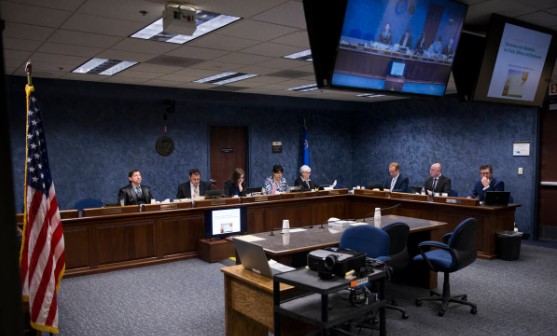 After sharing his own experience as a student, school board chairman Brett Willis — who owns Silver Lake Construction Company — said, “I’m still concerned that students are not getting a positive exposure to the trades.”

The school aims to fix that, he said, noting there’s a need to let students see how academics and career and technical education reinforce each other.

As part of the school’s approval, it must meet a handful of state conditions by certain deadlines, such as providing a plan for hiring a principal, a fully executed agreement with ACE High School in Reno for “ongoing services and supports,” a revised budget that includes an English-language learner teacher during the first year, and completing a pre-opening process for new charter schools.

ACE is the gold standard as far as community and school partnerships, charter authority board Chairwoman Melissa Mackedon said.

“I’ve never seen anyone do it better,” she said.

Applicants whose schools are denied will be notified in writing this week, said charter authority Executive Director Rebecca Feiden. They will have 30 days to revise and resubmit their applications, if they choose.

Resubmitted applications will come back to the charter authority’s board for consideration in November, Feiden said.

After a lengthy discussion, the board decided in a split 5-2 vote to deny the application for Rooted School-Clark County.

The proposed high school aims to open in August 2023 and is affiliated with the Rooted School Foundation, which has campuses in New Orleans and Indianapolis, as well as a campus opening in August 2023 in Vancouver, Washington.

The foundation’s goal is to “rapidly reduce America’s wealth gap by connecting underserved and talented teenagers with career and financial pathways,” according to meeting materials.

A charter authority recommendation memo states that there’s “a clear and compelling mission and vision” for the school, noting that Nevada has been “severely impacted” by the COVID-19 pandemic.

The school’s goal is for students to have a job offer and college acceptance letter by graduation, according to meeting materials.

Charter authority staff said, though, that inconsistencies had surfaced.

A footnote in a recommendation memo states that several sections of the application narrative are “identical or nearly identical to an application submitted by a different applicant” in summer 2021 and it “also erroneously included the name of that former applicant in several locations.”

In addition, the authority and review team found the application “challenging to fully understand,” the memo states.

“I really want to support this school,” Mackedon said, noting that she wished the application had not been so sloppy.

Board member Shauntee Rosales said no one expects a perfect application, but the applicant should show a little more work with the details — especially, with academics.

On Monday, the board also unanimously denied an application for Mind Your Books Charter School: The Jackie Collins Campus.

The school had proposed opening in August 2023 to kindergarten through seventh graders and eventually expanding to add eighth grade.

Feiden said it’s an interesting concept that would pair academics with social-emotional supports, but a review committee found the proposal to be underdeveloped.

Cami Taiwo, a former science teacher who now runs a nonprofit called Mind Your Books Education and is leading the effort to open the charter school, told the board that she was relieved to see the authority’s recommendation report.

Taiwo said a revised application will be submitted in January.