Taking the Triangle Out of the Truss

Looking at the impact of un-triangulated bearings

Trusses typically consist of triangulated panels with large, concentrated loads and bearings located at joints (panel points) between webs and chords that form those panels. This approach maximizes material performance within the truss as the internal transfer of load within the truss members is then primarily in axial stress (compression or tension), rather than in bending. However, there are times when truss designs transfer loads in a way that may not be anticipated by the building designer. One example of this is the use of un-triangulated bearings, in which a bearing is located in the middle of a panel and does not have a web running down to it (see Figure 1). This article will look more closely at this practice and discuss what designers need to consider when implementing it.

One common reason un-triangulated bearings are used in a truss design is that an interior bearing depicted in the construction documents does not remain in a uniform location over the length of a run of trusses with the same profile. If interior bearing wall locations or beams jog left or right under a run of trusses, it may be simpler to design for the interior supports varying from a panel point location in order to maintain the same web configurations. 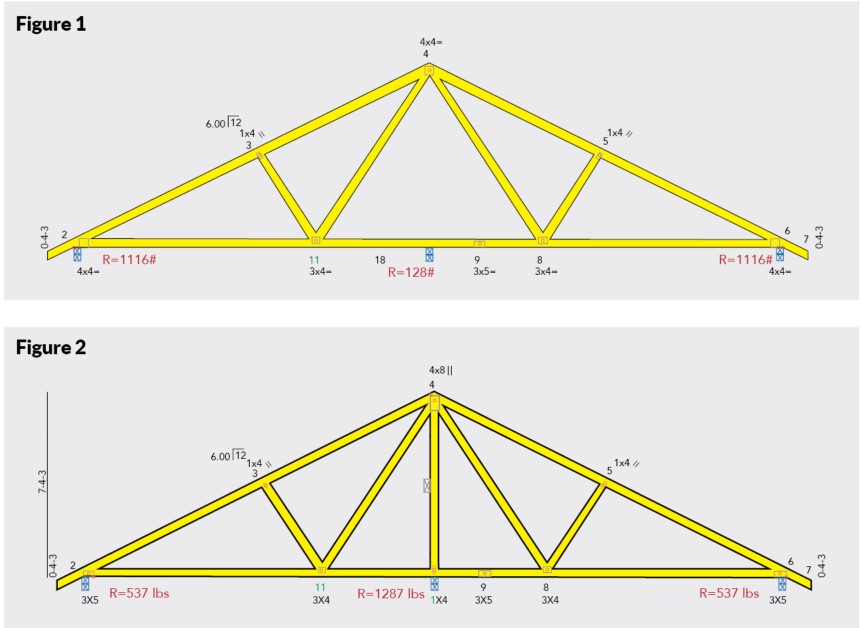 Another potential reason to use un-triangulated bearings is to reduce the overall production cost of the truss. If the truss is such that it can successfully span to the exterior bearings, designers may choose to reduce the web(s) running to the bearing to save on the cost of lumber and metal connector plates.

The Impact on Load Paths

It’s vital that truss designers pay attention to the impact this approach may have on the intended load paths designed into a building. In Figure 1, the truss layout with an un-triangulated bearing has end reactions of 1116 pounds and a low reaction at the interior bearing of just 128 pounds. Compare this to the truss layout in Figure 2, which includes a web down to the interior bearing. In this configuration, the end reactions are significantly reduced to 537 pounds, while the reaction at the bearing is 1287 pounds. This is due to the flexibility of the bottom chord panel in bending, as well as the availability of other load paths within the truss to the end bearings, resulting in less load being transferred to the un-triangulated bearing.

Often, building designers will approximate the end reactions based on the truss spans on either side of the interior bearing when determining the building’s load paths and how the end bearings should be designed to resist those anticipated loads. When comparing the un-triangulated bearing truss in Figure 1 to the triangulated bearing truss in Figure 2, the reactions in Figure 1 are 579 pounds greater at each end (from 1116 lbs – 537 lbs), which is more than twice the load. This obviously can become an issue as the building designer’s intent may not have contemplated the much higher load at the end bearings.

If not dealt with on the front end through clear communications, the significant difference between the load anticipated by the building designer and the actual load can create building performance issues. For instance, the specified headers above window and door openings may end up being insufficient to resist the larger loads. In turn, this leads to doors and windows that don’t open and shut properly. Specified beam sizes may be smaller than is otherwise necessary to transfer the more significant end loads, causing larger-than-anticipated deflection. Furthermore, other structural elements intended by the building designer to transfer load down to the building foundation may not perform as expected. 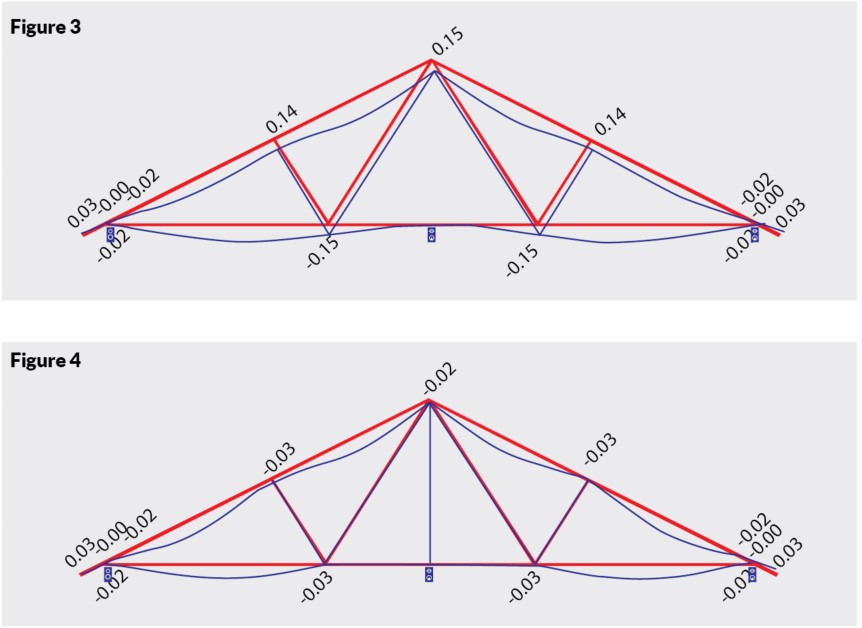 The Impact on Truss Performance

Another thing to consider is the impact an un-triangulated bearing will have on the overall performance of the truss over its life. Figures 3 and 4 illustrate the anticipated deflection of the truss designs in Figures 1 and 2 respectively. While the overall shape of the deflection between the two trusses is very similar, the magnitude of the deflection is much larger in Figure 3, which depicts the un-triangulated truss. Truss designers need to consider the potential impact these larger deflections may have on the performance of the roof and ceiling sheathing. This is particularly true when there is a variable bearing location in a run of trusses. In such a situation, differential deflection between adjacent trusses with differing bearing conditions may lead to unanticipated performance issues (see “Being Deferential to the Differential” in the Jan/Feb issue of SBCA Magazine).